When Ghosts Come Home: A Novel 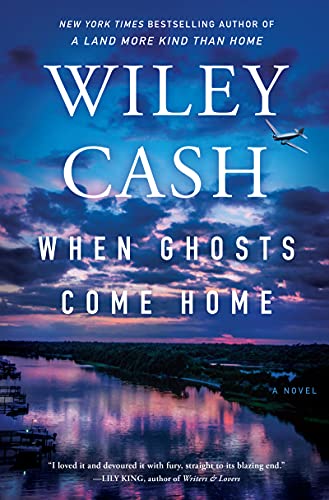 With his fourth novel, Wiley Cash demonstrates once again a breadth of compassion, an awareness of the intricacies of most of his character, and a willingness to end a story on an unexpected note. When Ghosts Come Home covers four days in the fall of 1984 on Oak Island, North Carolina, a community just south of Wilmington and deep in the heart of the old South.

A plane crash near the small airport on the island wakes Winston Barnes, the sheriff, and sends him into the night to find out what happened. What he discovers at the airport are a damaged plane, emptied of what he assumes was a cargo of drugs, and a dead man, shot in the chest.

This riveting opening leads to four days of plot twists that, although skillfully drawn, make for more plot than the 287-page narrative can support. Marie, Winston’s wife, is suffering from a second bout of cancer. His daughter, Colleen, has lost her first child and left her husband in Dallas to grieve in the comforting arms of her parents. The man who was killed, Rodney Bellamy, is a young black man, a recent husband and father. He is also the son of Ed Bellamy, a history teacher in the local high school and a former Marine sniper in Vietnam. Enter Bradley Frye, land developer, stereotypical racist, and all too uncomplicated and irredeemable villain. There’s no question who to root for, even when the heroes don’t adhere strictly to the law. And there’s no question about which characters deserve punishment.

Because this is a mystery driven as much, if not more, by plot than it is by characterization, it would be unfair to unravel too much of the story. Suffice it to say that other characters—false clues or not, gay friends, FBI agents, good deputies and bad—float in and out of the tale like radioactive particles. But most readers will have their Geiger counters clicking wildly early on in the novel. Readers will see where the story is heading. That is, except for one moment at the end.

Cash has a surprise in store, one that the reader may not like. But it’s a surprise that adds resonance to the mystery, even as it seems to sidestep some of the questions of character that fade like ghosts into the North Carolina night.