When a Dragon Moves In 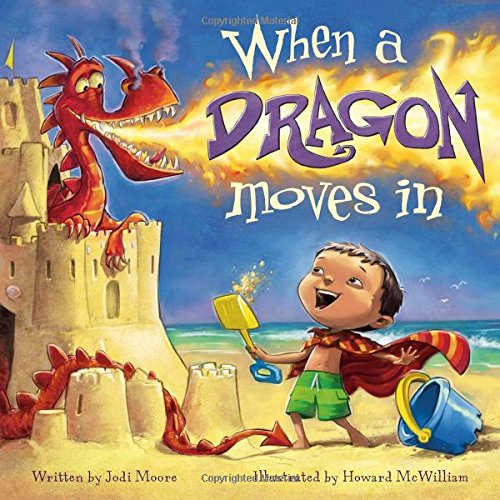 When a Dragon Moves In is a story about friendship, the beach, and a creative imagination.

At the shore for a day of frolicking in the sun with his family, a young boy builds a sandcastle—and that is when the fun begins—for when he builds a sandcastle, an enormous red dragon decides to move in. This is where the boy’s imagination takes flight. The pair spend the rest of the day playing together, becoming fast friends.

Excited about meeting a new friend, the boy tries to explain to his family about his new pet dragon, but no one believes him. They cannot hear the dragon roar, only the roar of the ocean. The boy shows them the dragon’s teeth that had fallen out into the sand; they see only seashells.

The boy realizes that there are many bonuses to having a dragon living in his sandcastle. First, he has a built-in marshmallow toaster. He has his very own raft for when he goes swimming, and the dragon makes a great beach defender when the bullies come and try to terrorize the beach.

But there are some disadvantages, too. Like when the dragon eats all the food, blows bubbles in the lemonade, leaves fingerprints in the dessert, and terrorizes the boy’s sister—which the boy, of course, takes the heat for.

Soon the boy’s parents have had enough of all this dragon nonsense and confront the son about it. Will the boy decide that he has had enough too and kick the dragon out of the sandcastle? Or will he defend his new friend in an attempt to get his parents to see that he truly does have a pet dragon who is causing all the tumult?

This 32-page picture book is a cute story about how sometimes our imaginations can run away with us. Though the words and story are simple and charming, the artwork really makes this book stand out. Howard McWilliam does a phenomenal job depicting each detail, lending humor and expression to characters children will want to look at again and again. The artwork really enhances the story, making it a book that children will want to read again and again.