What Were We Thinking: A Brief Intellectual History of the Trump Era 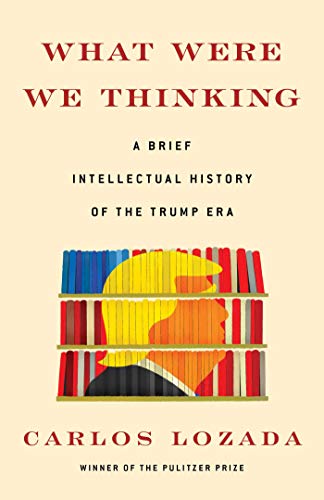 “What Were We Thinking will give you a fascinating overview and analysis of the books that explain where we are now, how we got here, and where we might be headed.”

Reading and commenting on 150 books on the Trump presidency (many more have been published since this book went to press), seems to be an act of masochism, but Carlos Lozada, the Pulitzer Prize-winning Washington Post Book Review editor uses the task as a way of gaining at least partial understanding of where American is in the Trump era. He distills the basic arguments and offers evaluations of representative examples of the massive body of work he has thoughtfully read. Overall, he is most interested in the books that “enable and ennoble a national re-examination.” Some of the best books in that category barely mention the current president but focus instead on the state of the union.

After an introduction, What Were We Thinking is divided into 12 topical chapters ranging from books that look to the American heartland to understand the grievances that led to Donald Trump’s victory to chapters on race, misogyny, voter suppression, Russian electoral interference, anti-Trump conservatives, immigration, and Trump’s corruption. Also included is a chapter on the confessional books by former Trump staff members that describe his bigotry and incompetence. Lozada also discusses the many books by Trump apologists. In each chapter, Lozada highlights books that seem to offer the most intelligent, constructive arguments.

Many of the books Lozada discusses center on the chaos and ineptitude of Trump’s White House caused not only by Trump’s narcissism but also by his distrust of expertise—his reliance on his gut instinct over knowledge. There is also Trump’s disturbing relationship with Vladimir Putin and Russia.

Like the authors of the majority of books about Trump, Lozada sees the president as a man of no principles who “governs with only his base and himself in mind.” His signature policies like the building of a wall along the Mexican border are more showbiz than policy. However, his bogus policies and multitude of lies are the result of a weakening of truth from both the right and the left. Trump’s supporters know he lies—they see feelings as more important than facts—but for over a generation, liberal intellectuals have been attacking objective truth in the name of postmodernism, paving the way for such large-scale mendacity.

Lozada’s liberalism is evident throughout but he can also be critical of the insensitivity and prejudices of liberal writers. For instance, he refers to The West Wing writer and producer Aaron Sorkin as “One of the nation’s top renewable sources of sanctimony.” He worries about liberals’ acceptance of a political-cultural divide that will outlast the Trump presidency and believes that healing of America’s wounds can only come when people on both sides reject the current political polarization and talk to one another.

Lozada’s last chapter focuses on what he calls “Death of Democracy” books that see the support for Trump as the desire of some Americans for an autocrat rather than a constitutional president. The acquiescence of the Republican Party to Trump’s behavior is seen as a crucial danger sign for the future of democracy—and the future of the Republican Party. But some writers note that there have always been parts of America under the rule of strict racist regimes.

Cozada’s epilogue offers brief descriptions of the 12 books he considers essential to understanding the United States during the Trump era. Most interesting is his privileging of the Mueller Report as the best book so far on the inner workings of the Trump administration.

This reviewer is grateful to Lozada for doing the thoughtful reading and digesting of this large, constantly growing body of literature and offering such cogent analyses of this canon. If you haven’t read these 150 books, What Were We Thinking will give you a fascinating overview and analysis of the books that explain where we are now, how we got here, and where we might be headed.