What Is Obscenity?: The Story of a Good for Nothing Artist and Her Pussy 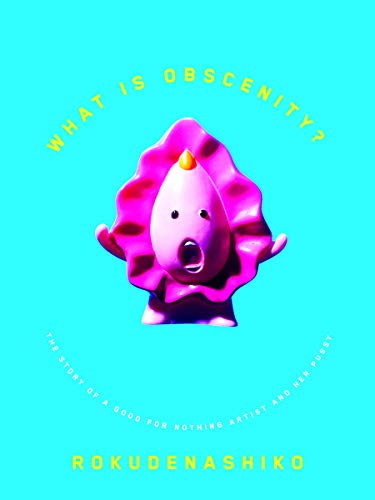 Written as a traditional manga, and meant to be read as one (back to front, right to left), artist Rokudenashiko, a play on the Japanese words “useless” and “good-for-nothing,” tells her story of becoming a manko artist and how she was arrested for it in Japan.

“Manko” means “vagina” in Japanese, the origin of the word has much speculation, and technically Megumi Igarashi, the real name behind the artist Rokudenashiko, does vulva art rather than vagina art. Roku (a shorter version of the artist’s pseudonym) creates artistic versions of her external labia.

Rokudenashiko’s story of how she became a manko artist really begins with her struggle to become a traditional manga writer and occurs by accident. While she was looking up information on laser hair removal, she discovered an ad for labiaplasty—a cosmetic procedure sometimes called “female rejuvenation” in which women have parts of their labia removed. Roku decided to get the procedure. The story doesn’t say much about the reasons that really drove her into the surgeon’s other than she thought it would make a good manga and that she felt her own labia was “too meaty.” It’s unfortunate that Roku doesn’t take any time to discuss her personal feelings about the labia she was about to permanently alter and create art out of.

Roku’s story is like most women’s in that the manko or the vagina and its accoutrements are not to be discussed publicly, and privately they are shamed for the curiosity or pleasure. What was the artist being told about her labia that encouraged her to get plastic surgery? Was it access to pornography that depicted similar looks? Was it negative talk from her husband or lover? Was it perpetual ads like the United States’ 1950s Lysol douching encouragement in magazines? Where did this discomfort come from? What was the process for this procedure—was there anyone to suggest that there was no medical reason for having this done?

Once the story was done on labiaplasty, there was little else for Roku to discuss. So she went on to make a mold of her labia, and deciding it wasn’t particularly interesting to look at, decorated it. Roku has held several art shows with her labia molds decorated to depict waterfalls, putting greens, traditional Japanese festivals, etc. For months she had art shows but was only arrested after she made a large 3-D scan of her labia and created the top of a kayak out of it using crowdfunding. It was then that she was charged with distributing obscenity.

What Is Obscenity is a fantastic memoir manga that describes the artist’s time in jail as well as her own artistic process. Interspersed between chapters are photographs, thoughtful short essays, and quotes from news pieces in Japan and the United States that examine obscenity, the artist’s intent, the prosecutorial and arrest process in Japan, and Roku’s own case. There is a lot going on in this tiny book. Rokudenashiko’s story isn’t over: She is still making art. Hopefully the United States will see more art shows from her.

The book is written in a serialized style, and slower readers will appreciate the recap at the beginning of each chapter. Though the focus is on Japan’s legal system with regards to Roku’s case, it can still be used as a thoughtful discussion about expectations of other legal systems.

The art Rokudenashiko has gone on to create is reminiscent of Jamie McCartney’s “Great Wall of Vagina” in which lots of different women’s labia are on display in plaster molds showcasing the great and beautiful differences between everyone. What Is Obscenity? brings up questions and issues such as self-esteem and body image, artist rights, crowdfunding and distribution, and cultural definitions of obscenity.