We've Got to Try: How the Fight for Voting Rights Makes Everything Else Possible 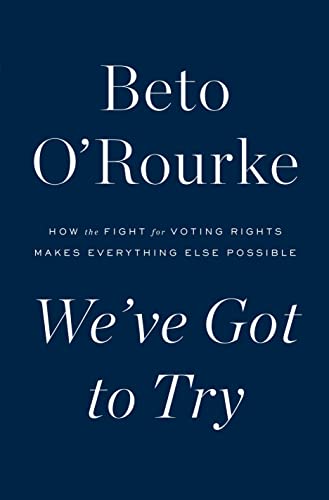 “Throughout the book, O’Rourke mixes positive with negative as he discusses where the country is and how it got here, primarily with his focus on history in Texas.”

In his new book, We’ve Got to Try, Beto O’Rourke focuses on voting rights and what is happening to those rights in America. He does this primarily through the lens of Texas history with regard to that topic.

The book is well organized into three part, beginning with an Introduction in which he talks about “The lessons of our history clearly show us that fair elections . . . have always been the exception, not the rule.” He continues to bring to light how, “. . . if history confirms that the right to vote was always under threat, sometimes violently so, it might also offer a guide for how we could overcome these threats. . . . “

The Introduction is lengthy, but he uses this as a means to identify numerous historical persons who have been faced with a variety of voting issues. Some of these people are well known, but many are not.

Throughout the book, O’Rourke mixes positive with negative as he discusses where the country is and how it got here, primarily with his focus on history in Texas.

As he prepares the reader to move into Part I, he does so in a positive tone. “To put it as positively as I can, there is no better time to be alive if you love this country and care about our form of government. It’s never been under greater attack in our lifetimes—and not since 1965 has there been a better opportunity to fight for it.”

In Part I, O’Rourke begins with El Paso and Dr. Lawrence Aaron Nixon in 1924. “. . .a Black man in Texas, a state where people who looked like him were not supposed to be able to vote.” O’Rourke takes the reader through several decades of Dr. Nixon going to the polling place at every election, being turned away, and yet returning, sure that at some point, he would be allowed to vote. That became reality on July 22, 1944, “when Lawrence Nixon and his wife, Drusilla, walked the three blocks from his office to Fire Station No. 5 and showed their poll tax receipts. This time, they voted.”

O’Rourke believes “we must look to the heroes of our past to guide us toward the victories that our country needs.”

In Part II, O’Rourke has selected several counties and cities in Texas and people who live in these counties and cities to explain his premise. He explains his determination to win his Senate candidacy in 2018 by visiting each of the 254 counties in Texas. The last was Cooke County, a rural county of 41,257 residents. This county was on Truman’s whistlestop tour in 1948, and O’Rourke recalled a Truman quote: “America, was not built on fear. America was built on courage, imagination, and an unbeatable determination to do the job at hand.”

His travels through Pecos County, LaSalle County, and Fort Bend County where he realizes that in these localities are where “commissioners, school board trustees, city county members—are likely to see their constituents on a daily basis. . . .” and these residents are the ones who most need to have their voting rights secured.

One of the most startling chapters that he writes about is that of Fort Bend County, where a construction team in Sugar Land, Texas, “while preparing for a new public school facility, bones were found, leading to an investigation.” The investigation led to the discovery of the remains of 95 Black men and boys. Here O’Rourke goes into detail about the history of a prison located in Sugar Land, and how prisoners were “rent(ed) out” to companies as cheap labor. This system was established just after the Civil War and was not abolished until 1912.

O’Rourke sees this repeal as “a reminder that, just as with the success of voting rights in1965, deeply unequal democracy—one that in both instances had disenfranchised African Americans—can still achieve important outcomes.”

In the last of Part II, O’Rourke goes into extreme detail about The Border, focusing in the beginning on a story of massacre of Mexican Americans in Porvenir, TX, by ranchers, Rangers, and soldiers. Here he talks about how the residents of the El Paso and Juarez communities are fused together as one, in spite of the separation of countries.

While this does not relate directly to his discussion on voting rights, he sees the challenges of immigration as, “Until we change our immigration laws to reflect current demands and challenges . . . we will continue to create  incentives for people to break the law . . . When we fail to seriously address a problem as big as this one, . . . It becomes easier and more popular to scapegoat immigrants for problems with crime, or jobs, or social services. Or even elections.”

Donald Trump gets some attention here in talking about immigration. “At the State of the Union address in February 2019, Donald Trump described El Paso as “one of the nation’s most dangerous cities.” Another mention of the importance of history and the lessons we should learn.

O’Rourke sets the record straight. “El Paso was ranked amongst the safest cities in American in 2019 . . .” It was six months after “Trump’s incendiary speech . . . a gunman killed twenty-three innocent people because he believed the fictions being spun by those in power.”

Throughout the book O’Rourke pulls no punches about how US politicians have “accelerated attacks on the right to vote . . . but not out of rhyme with what has come before.”

O’Rourke reinforces his discussion In Part III, where again referencing Dr. Nixon, he talks about overcoming the negatives of history and moving forward. “We must embrace the challenges before us . . . while the outcome of the fight before us might be uncertain, we know one thing for sure. We’ve got to Try.”