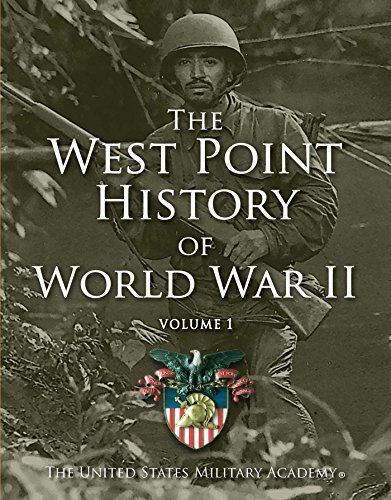 “a truly magnificent volume . . . for any university teaching an undergraduate course in World War II.”

In 2011, the Department of History at West Point began the unprecedented project of updating its military history curriculum used by all cadets with a multimedia company specializing in e-publishing.

The result has been a revolutionary transformation in the concept of writing and publishing military history textbooks using interactive maps, charts, and illustrations in a series of volumes covering nearly 2,000 years of warfare and written by an assembly of the finest military historians at work today.

Since the project began, a matching interactive e-book and traditional hard cover volume has been published for the American Civil War, and now this matching set covers the beginning years of World War II, from the origins of the war to 1942.

There are truly not enough superlatives to describe this volume. Individual chapters have been contributed by such renowned authors as Robert Citino, chronicler of the German way of war and the German Wehrmacht; and Richard Overy, bestselling author of important new works on the economic aspects of the war and the contribution of industry to the war effort.

To accompany each chapter, the text provides lavish maps, timelines, figures, and order-of-battle diagrams for each of the major battles and campaigns.  While these would be expected from a military history text, they are nonetheless extremely well done, and include two bonus fold-out diagrams that explain Germany's devastating blitzkrieg doctrine and the new paradigm of naval warfare created by the replacement of battleships with aircraft carriers as the primary offensive arm of naval battle.

While intended to serve as an undergraduate textbook, there is a great deal of scholarship to unpack from this text, even for the experienced student of World War II. Several side boxes provide a condensed overview of the military doctrine and technology developments of the major combatants in the interwar years, showing the diverging paths Germany, France, Italy, Britain, Russia, Japan, and the United States choose for integrating increasingly capable new weapons such as the airplane, tank, and aircraft carrier.

More importantly, the text discusses how France and Germany had very different reactions to the battlefield experiences of World War I. The French, traumatized by the bloodletting at battles like Verdun and the destruction wrought over large swaths of their country, assumed a very defensive doctrine manifested by the massive and ultimately futile construction of the Maginot Line.

The Germans, conversely, were determined to restore mobility to the battlefield and avoid another drawn-out conflict. While the French were digging their massive fortifications, the Germans were developing tactics and training on the use of tanks as breakthrough weapons to avoid the massive battles of World War I by quickly enveloping their opponents armies, disrupting their ability to command and control their forces, and paralyze their entire military decision process.

As an interesting discussion point, the text describes how the Soviet Union was not static during this period in spite of the toll of the Revolution and Civil War, which lead to a communist state. In many aspects the Red Army developed superior mobile warfare doctrine and strategy which, tragically for the Soviets in June 1941, ended when Stalin began his pre-war purges of the Red Army leading to the execution of many of the brightest minds in the top ranks.

In the Pacific Theater, the text does an excellent job of describing Japan's military developments and strategic situation prior to December 1941, noting that the Japanese army ignored most of the inter-war military developments of the west, completely ignoring the development of armored warfare doctrine to maintain the code of Bushido, or personal bravery, to carry the day in battle.

The Japanese Navy, in contrast, outdid their Western opponents in the development of carrier doctrine; the development of torpedoes and night fighting tactics; and most importantly, developed the finest single-seat fighter of the pre-war period in the plane dubbed by the allies the Japanese Zero.

As the war unfolds in one Axis triumph after another through mid-1942, this volume does an excellent job of showing how the tactical prowess of the Axis forces is not matched by an overall strategic plan for victory. Both the Germans and the Japanese underestimated the determination and latent industrial capacity of their principle foes, the Soviets and the United States, and a wonderful chapter on peoples and economies at war outlines in both text and graphics the magnitude of resources available to the Allies.

This is a truly magnificent volume that should become not only standard issue at West Point but for any university teaching an undergraduate course in World War II. The enhancements of the coordinated e-book will no doubt be even more intriguing to a generation raised on multimedia and interactive texts.