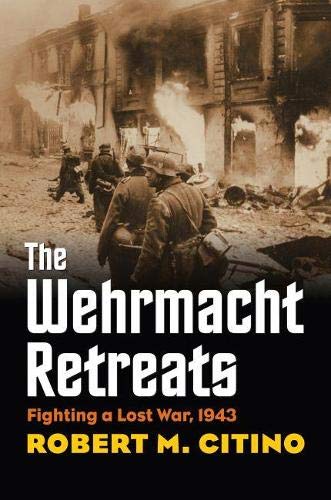 “Can Dr. Citino really believe that the general officers in the German Army—virtually all of whom served in the First World War and believed probably to a man that the German politicians who acceded to the armistice and German defeat were criminals—would willingly choose surrender and another lost war rather than death on the battlefield with their troops? Robert Citino is an excellent historian and a gifted author. He ought to refrain from discrediting himself and his work by embracing a caricature of his subject that is so politicized and divorced from reality.”

The Wehrmacht Retreats: Fighting a Lost War, 1943 is the most recent of a number of very highly regarded works in the field of military history written by Robert M. Citino. The author, now Professor of History at the University of North Texas, has established himself as an authority on German military history.

In The Wehrmacht Retreats, the author covers the combat experiences of the German armed forces—the Wehrmacht—during the critical year 1943. For it was in 1943 that the Wehrmacht began to reach its “tipping point” toward ruin in every portion of the globe on which it had planted the German flag.

In Russia, it spent the first half of 1943 parrying Soviet endeavors to exploit their victory at Stalingrad, and the remainder of the year dealing with the near collapse of the front in southern Russia after the failed German offensive at Kursk.

In the Mediterranean basin, the Wehrmacht lost another entire army in North Africa, as well as the island of Sicily. Only in Italy were German forces able to turn aside the offensive thrusts of the western Allies—at least for the moment.

It is probably safe to say that military historians are not generally recognized for their creativity. Robert Citino is thus unusual, for in The Wehrmacht Retreats he demonstrates both knowledge of the subject matter and creativity in handling it. For example, he utilizes the fictional vignette to introduce the reader to the supposed thought processes of Adolf Hitler and his generals as they struggled to make the best of their declining military fortunes.

Dr. Citino’s use of the fictional vignette is a clever and engaging touch, one that cannot fail to impress even the most hidebound of the author’s colleagues.

The Wehrmacht Retreats also reflects such a profound grasp of both the mountains of primary source material and the existing body of literature on all phases of the Second World War in Europe, as to make it what is often called “indispensable reading” for those with a keen interest in the subject matter. It incorporates a wealth of detail concerning the operational planning and critical thinking of military leaders “on the ground” and on both sides of the conflict.

Nevertheless, The Wehrmacht Retreats is not without faults. For example, Dr. Citino states that following the successful Allied landings in North Africa, the Axis had numerical superiority in Tunisia, where its forces had elected to take their stand. The combined total of German and Italian troops in Tunisia is described as “over 100, 000 men.” The casual reader might conclude from this that the Wehrmacht had the advantage in North Africa, particularly when Dr. Citino suggests that all of the Axis troops there were wily veterans of desert fighting.

Yet on November 8, 1942, the date of the first Allied landings in North Africa, the United States Army deposited over 107,000 troops on North African soil. Over the next three weeks it landed another 146,000 troops, and by the end of April 1943 there were nearly 400,000 American troops in Tunisia.

The U.S. Army landed almost 800 tanks on its beachhead in North Africa on November 8, 1942; over 60 percent of these vehicles were capable of successfully engaging any German or Italian tank, save the Tiger, of which there were very few. Throughout the brief war in Tunisia, the number of Axis tanks rarely surpassed 200.

And the careful reader will observe that the foregoing information does not include data on the considerable number of combat vehicles, fighting men, and aircraft of the British 8th Army and its associated commands also engaging the Axis in North Africa at the same time.

The high quality of Professor Citino’s work is not diminished, however, by the occasional misstatement of fact, of which there were few readily discernible. Much more damaging to the credibility of The Wehrmacht Retreats is its author’s decision to demonstrate his obeisance to the Germanophobia that presently holds many academics in thrall.

In his book’s final chapter, Conclusion: Fighting a Lost War, Dr. Citino criticizes the German officer corps, for example, which having faced the catastrophe of Stalingrad and the loss of North Africa, nevertheless “fought on and . . . did not waiver. Despite all their alleged disagreement with their Fuehrer . . . .the commanders remained loyal…they served his ends, they fought his war.” The German officer corps, one supposes, should have risen up and thrown Hitler out.

Yet it would seem likely that German officers had no illusions about the viciousness of the Nazi regime. These suspicions were proven correct a year later, when the assassination plot of July 20, 1944 miscarried. Many of its perpetrators were hung from meat hooks with piano wire; the lucky ones were shot out of hand.

And if I recall correctly, the British officer corps did not overthrow its government after the humiliation of being driven from the European continent in dinghies, seeing the nation teeter on the brink of defeat owing to the predations of German U-Boats, losing Greece, Crete and much of North Africa, and watching British imperial bastions such as Singapore fall to the enemy. Where is a military coup more likely to succeed: In a democracy like England or a dictatorship like Nazi Germany?

Dr. Citino points out that the German officer corps recognized that the war was lost after the events of 1943 “and yet Hitler had no trouble finding commanders who would continue to serve him loyally.”

It would appear, then, that Dr. Citino favors the notion that the “commanders who . . . continue[d] to serve [Hitler] loyally”, including presumably officers engaged with their men at the front, should have abandoned their men to their fate while taking such steps as they considered necessary to remove the Fuehrer.

In this vein it is worth noting that elsewhere in his book, Dr. Citino refers approvingly to Gerhard Weinberg’s condemnation of German Field Marshal Ferdinand Schoerner for having abandoned his men to the tender mercies of the Red Army in order to save his own skin.

Finally, Professor Citino opines that it was obvious by the end of 1943 that the war was lost, a fact well recognized by a “lot of smart minds in the officer corps” and that “the war would go on as long as the officers wanted it to, and not a day longer.”

Can Dr. Citino really believe that the general officers in the German Army—virtually all of whom served in the First World War and believed probably to a man that the German politicians who acceded to the armistice and German defeat were criminals—would willingly choose surrender and another lost war rather than death on the battlefield with their troops?

Robert Citino is an excellent historian and a gifted author. He ought to refrain from discrediting himself and his work by embracing a caricature of his subject that is so politicized and divorced from reality.