We Are Totally Normal 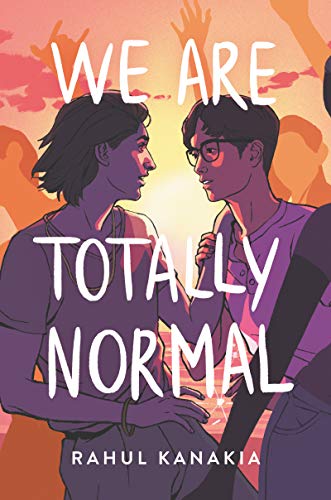 We are Totally Normal is set in a high school in California and depicts a young man in his final year who is confused about his sexuality. Adolescence is a testing time for most young people when first encountering relationships, emotions, and sexual awakenings, but most navigate their way through without too much turmoil. But what happens when a young man finds he can’t easily decide whether he is straight, gay, or bisexual? This makes a good story, and its narrative is not drowned out by outward fears of prejudice and homophobia. Instead, it concentrates on the inner turmoil of one young man as he tries to make sense of his emotions.

Nandan, a popular and well-liked young man with many friends, spends most of his time partying with older boys who are fixated with having sex with as many girls as possible. Nandan starts dating a girl, resulting in an awkward sexual experience that abruptly ends their liaison. Then one night he invites a school friend, Dave, to his apartment and during a discussion about relationships, they kiss and have sex. It feels natural and enjoyable, but Nandan still claims to have feelings for girls, too. Confusion is always close by. Sometimes he enjoys sex with Dave—often, he makes himself believe that it is a phase he is going through or that he might be bisexual—and at other times he forces himself to think about girls when he is pleasuring Dave. To deepen the confusion, Nandan tells Dave that their relationship is a casual experiment and not something that requires a label.

When Nandan and Dave’s relationship develops deeper, Nandan tells friends about their sexual encounters. His friends are fine about him being gay, and this helps him realize he won’t be rejected if he comes out more formally. But he still wonders if he needs to because he has been reading about demi-sexuality—those who only experience sexual attraction to people they have close emotional connections with. He questions if this best describes him and Dave, and if, perhaps, he isn’t gay after all. Nevertheless, he and Dave decide to tell their families and friends that they are in a relationship. Despite receiving widespread approval from family, friends and acquaintances, Nandan still questions his relationship with Dave after his feelings turn to shame and disgust every time they have sex.

Nandan begins to wonder again if he would be better suited with a girl because when he masturbates, he thinks of girls and not Dave. He even questions if he has become gay in order to get closer to girls, who appear to confide in him more as a result of his sexuality. So he decides he is straight and breaks up with Dave. He tells everybody he prefers girls more than boys, although few believe him, and even he has his doubts.

His decision to revert to heterosexuality is quickly cast aside because the end of school year is nearing and everybody is thinking about their futures. Nandan thinks about going to a university where he would be able to start a new life and maybe get a girlfriend. But before that there are still a few end-of-year parties to attend and somewhere in between he will have to muster up the courage to say a final goodbye to Dave, who he knows is in love with him. Can he really convince himself that he is straight and risk leaving behind the person who loves him before embarking on a new life where he seeks out girls for friendship, love, and sex?

This is a well-written book and has a nice flow throughout the story. The author clearly did a lot of research before embarking on writing it because he taps into the world of Nandan and his friends with great ease. The story is fast paced with many twists and turns. It looks at relationships and attitudes toward sex and questions if it’s easy to switch feelings on and off especially when it comes to sexual arousal.

The book also explores different types of sexuality and human connections and examines sex acts where genitalia have become less important than the emotional involvement between two people, irrespective of their gender identity. This is a wonderful resource book for exploring feelings and is ideal for generating thinking and debate around sexual orientations, sexual experiences and identity. It brings awareness and understanding to complex situations, sexual thoughts, and experiences and makes an ideal book for debate among young LGBTQ+ groups where discussion can take place on the many facets of Nandan’s journey as he navigates his way through his confusion to happiness before returning to deeper confusion and uncertainty.

Maybe males like Nandan find lasting happiness in relationships after emerging from their adolescent confusion around their sexuality. There will also be those who continue to live their lives in the shadows. Some easily switch to and fro between the opposite sex and same sex partners and identify as bisexual. There will also be those who consider themselves to be first and foremost heterosexual but happen to enjoy sex with other men. Because this is devoid of emotional feelings, they claim it prevents them being classified as gay—although internalized homophobia also plays a part in this rationale.

The final word on We are Totally Normal: It will make the reader realize that some adolescents—and indeed adults—have different experiences in forming their sexual identity and that the whole subject of sexual orientation is complex and multifaceted for certain people, more than the mainstream populous imagines it to be.