We Are All Good People Here: A Novel 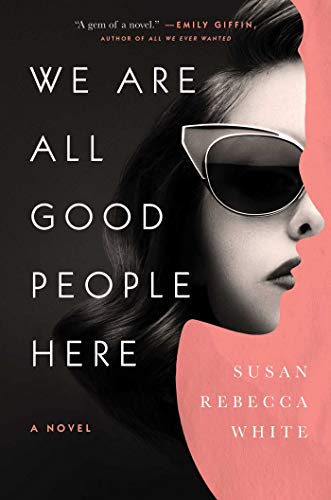 “A pleasant page-turner with an important reminder about the value of social activism.”

In the fall of 1962, Eve Whalen and Daniella Gold meet on their first day at Belmont College, the traditional, sheltered women’s school in Virginia whose students are “renowned for their Beauty and Brains.” And for the next three decades, these two protagonists hop through pretty much all of the major social protests and cultural changes of the era—civil rights, the Vietnam war, drugs, the glass ceiling for women, the opening of the closet for gays, even the #MeToo movement 25 years before it actually happened. They weave in and out of each other’s lives, sometimes flinging away their genteel Southern upbringing and sometimes clinging to it.

Daniella is blackballed by the best sororities because her father is Jewish. Eve naively tries to improve the working conditions for the African American housekeepers at Belmont, with disastrous results. Daniella goes to Mississippi to register black voters during the Freedom Summer of 1964. Eve joins a Weathermen-like cell that believes the U.S. needs to be shaken up by strategic bombings. When Daniella enrolls in law school, Eve’s brother grumbles that “she essentially stole a spot in her class that should have gone to a man who will one day need to provide for his family.”

Daniella is a model of earnest liberal advocacy, quitting her job as a corporate lawyer, even though she desperately needs the paycheck, in order to join a nonprofit that helps defend indigent people on Death Row. “The only thing that really matters is that we make our lives count while we’re here,” she lectures her 11-year-old daughter, Sarah.

There’s more complexity in the portrayal of Eve, who swings from the extremes of radical left to country club right, ultimately committing a selfish act of disloyalty. Nevertheless, through most of these extremes she remains basically good at heart, or at least understandably panicked—as much one of the “good people” of the book’s title as Daniella.

The constant ups and downs make for an engrossing plot, told by alternating narrators, mainly Eve, Daniella, and Sarah.

Bravely, author Susan Rebecca White—who has written three other novels about Southern women rebelling against their social traditions—doesn’t try to modernize her characters’ language. Back in the sixties and seventies, even the Freedom Rider Daniella talks about a “colored” little boy.

If We Are All Good People Here isn’t a deep look into the psyche of the Boomer generation, it may be the best kind of beach read: a pleasant page-turner with an important reminder about the value of social activism.

Even debutantes can change the world for the better.