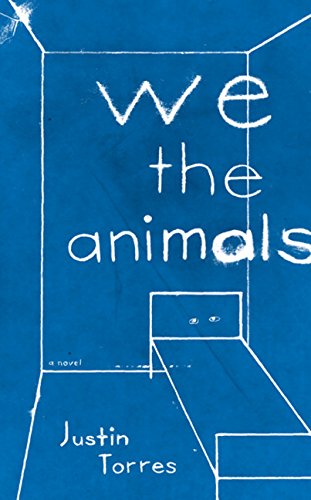 “That such a young author writes so well in his debut novel seems miraculous. Few books can match the trifecta pulled off in We the Animals: simplicity married to artistry and candor. For this reason, along with others noted here, this book could not be more highly recommended.”

As the cliché would have it, good things come in small packages.

And it is said that clichés become clichés because they are inherently true.

There certainly is truth in the fact that a very, very good thing has come in the form of a very small package. In a scant 144 pages, Justin Torres has created a world populated by some of the best-drawn characters of recent years. More, author Torres possesses a wizard’s way with words, a knowing use of patois, and a sentence structure that makes reading his small book slow going, in that the reader must read sentence after sentence again and again in order to fully appreciate the twists and turns of phrase.

Only every so often (another cliché: once in a blue moon) does something this well written come along.

The book begins with prose as dense and rich as poetry:

“We wanted more. We knocked the butt ends of our forks against the table, tapped our spoons against our empty bowls; we were hungry. We wanted more volume, more riots. We turned up the knob on the TV until our ears ached with the shouts of angry men. We wanted more music on the radio; we wanted beats; we wanted rock. We wanted muscles on our skinny arms. We had bird bones, hollow and light, and we wanted more density, more weight. We were six snatching hands, six stomping feet; we were brothers, boys, three little kings locked in a feud for more.”

The greater accomplishment is that Mr. Torres sustains the poetry in his coming-of-age tale set in a Hispanic family—three young sons and their two Brooklyn-born parents, who married after the girl became pregnant at 14—living on the fringes of poverty and violence in upstate New York.

Like all children, the three brothers accept the circumstances of their childhood as the norm and accept each other as fellow members of their pack. The mother works nights in a brewery. The father, when he works at all, is a night watchman. In one quotidian moment in which the father gives his sons a bath and the mother prepares for work, we see the adults through the eyes of their children:

“We saw everything—how our skin was darker than Ma’s but lighter than Pap’s, how Ma was slight and nimble, with ribs softly stepping down from her breasts, how Paps was muscled, the muscles and tendons of his forearms, the veins in his hands, the kinky hairs spreading across his chest. He was like an animal, our father, ruddy and physical and instinctive; his shoulders hulked and curved, and we had, each of us, even Ma, sat on them, gone for rides. Ma’s shoulders were clipped, slipping away from her tiny bird neck. She was just over five feet and light enough for Manny to lift, and when Paps called her fragile, he sometimes meant for us to take extra-special care with her and he sometimes meant that she was easily broken.”

And later, again writing about the parents:

“We boys, we had always seen so much of them, penniless or flush, in and out of love with us, trying, trying; we had seen them fail, but without understanding, we had taken the failing, taken it wide-eyed, shameless, without any sense of shame.”

The image of three resonates through the book: three kings, three stooges, three chipmunks, three musketeers, even the Holy Trinity as represented by the three brothers: Father, the law-making eldest son; Son, the law-breaking second son; and Holy Spirit, the peace-making youngest, our narrator. Like the Trinity, the three are one, a pack (animal imagery resonates as well, from the title onward), growing, mewing, finding their way.

It’s a story we’ve read before, but never this way, never told in such muscular language, language that has been distilled until all impurities are removed. Concentrated until each sentence is a chapter. As if Justin Torres says out us: This is my story. Mine. There is no other like it.

We the Animals is moving. Powerful. A tale of sameness and otherness, of staying together and moving apart. Of the powerful magnetism that is the family.

It is the sort of book that draws attention; one that is the foundation for a career to come. One that makes some noise. It deserves attention, if only for this perfect moment, after one brother (Manny) awakens the youngest to say that he has had a dream about kites:

“A whole sky full of kites, and he was holding all the strings. He told me how the good kites and wicked kites got all mixed up, how he tried to hold on to the good and let the rest float away, but after a while he couldn’t tell them apart.”

The brothers lie on their backs, their limbs intertwined. The youngest drifts again toward sleep, but hears his brother’s voice:

“’What we gotta do is, we gotta figure out a way to reverse gravity, so that we all fall upward, through the clouds and sky, all the way to heaven,’ and as he said the words, the picture formed in my mind: my brothers and me, flailing our arms, rising, the world telescoping away, falling up past the stars, through space and blackness, floating upward, until we were as safe as seed wrapped up in the fist of God.”

That such a young author writes so well in his debut novel seems miraculous.

Few books can match the trifecta pulled off in We the Animals: simplicity married to artistry and candor. For this reason, along with others noted here, this book could not be more highly recommended.