Watching You Without Me: A novel 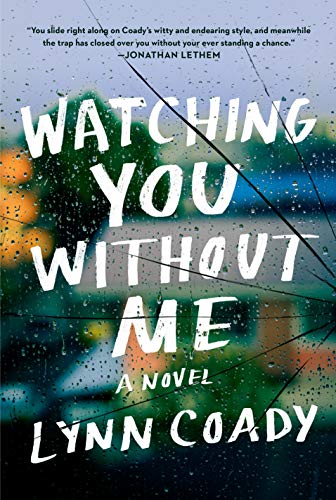 A return to one’s childhood home can be a fraught undertaking in any circumstance. If you’re a forty-something divorcee who sprinted off to college more than half-a-lifetime ago, leaving your martyr-leaning mother to care for your “mentally handicapped” sister, the circling back may be rockier than expected.

Such is the set-up for Lynn Coady’s latest novel, Watching You Without Me, where Toronto legal-consultant Karen returns home to transition sister Kelli after their mother’s death. Old traumas and resurgent guilt end up being secondary concerns, however—because why is semi-hunky caregiver Trevor so at ease with all parts of Kelli’s world? And why does he have a key to the family’s house?

Karen, we learn, fled her small Nova Scotian town—and her mother Irene’s unrelenting dutifulness—after high school. Big sister Kelli’s bottomless needs seemed a trap Karen hoped to escape and that she urged her mother to abandon. Irene, however, unable to consign Kelli to an institution, looked after her across decades, enlisting an ever-expanding team of caregivers for Kelli as her own health declined. When Karen shows up to handle affairs following the funeral, she discovers a patchwork of agency-deployed helpers appearing for shifts.

Most dedicated of all is Trevor, dispatched from Bestlife, an agency whose name evokes both the upbeat and the creepy—a fitting employer, actually, for Trevor himself. Karen finds Trevor’s rapport with Kelli reassuring, initially, if too casual; she also finds Trevor’s physicality mildly thrilling and then overly insistent. Trevor is ever-eager to please, to assist. Though his official duties extend only to taking Kelli on neighborhood walks, he volunteers to mow the lawn, clean the gutters, and more; before long he’s providing Karen with suggestions—adamant ones—for Kelli’s care and even the proper realtor to assist with a sale of the family home. “You’re gonna want someone you can trust,” Trevor counsels, a complicated piece of advice, to say the least, coming from his mouth.

As Trevor’s participation in Karen’s life becomes increasingly manipulative—and a bit narratively clunky, at times—a more nuanced spotlight falls on Karen’s attempts to make peace with her own past. Buried in the uncertainty she feels about reoccupying the family home is a strain of sad, wishful thinking, a yearning to believe Kelli’s situation will smooth out.

As the five weeks Karen has allotted for wrapping things up diminishes, she comes to appreciate the patterns in Kelli’s life that have become set in place—and it gives her pause. Procrastination ensues, an extended limbo of indecisiveness regarding her sister: with no Irene to harangue, Karen understands the gravity of abandoning her sister to strangers. She also, unexpectedly, empathizes with her mother’s travails.

This, really, is where the primary interest in the story resides. The flashier thriller-esque scenes with Trevor intermittently captivate, but his menace grows plodding as the story progresses and his machinations begin to spin in place. More engaging are Karen’s ongoing rationalizations about Trevor as well as her own reluctance to commit Kelli, both of which draw her closer to a type of sympathy with her mother; there are moments she seems to be channeling Irene, using her mother’s words, even. By excusing Irene’s reliance on Trevor—the very person who, ironically, she herself comes to rely on—she not only attempts to discern her mother’s motivations, she seems to blur the line between herself and the woman she once found a frustrating enigma.

Ultimately, Trevor’s hectoring trumps all. When Karen reflects on her own failed marriage (“The subconscious starts sending messages: Be vigilant. Don’t relax. Here’s a bogey man or two to keep your nerves on edge.”) she might as well be commenting on the strange gravity Trevor exerts on her and Kelli. As she turns to him again and again for insight into Irene herself, she recognizes just how much power she is granting Trevor—and how it makes the work of stabilizing her increasingly malleable personality all the more complicated.

Coady has arranged a delicate balancing act for herself—casting Trevor as creepy and appealing at the same time, enlisting him as both tormentor and confidant for Karen. It’s tough to keep the tension taut and credible throughout, and some readers may feel frustrated with Karen’s ongoing obliviousness, the broad allowances she makes for a man who bullies her. What isn’t frustrating is Karen’s struggle to accept her sister and her mother, to transmute guilt through decisiveness, and, finally, to make sense of the shards of her past. “There was something . . . that was drawing my mother and me closer together,” Karen acknowledges to herself even as Trevor’s menace fails to abate. “I felt like I was starting to see her in a way I hadn’t before—in a way that felt clear, sharp-edged, for once.” It’s the deepest thrill of the story.