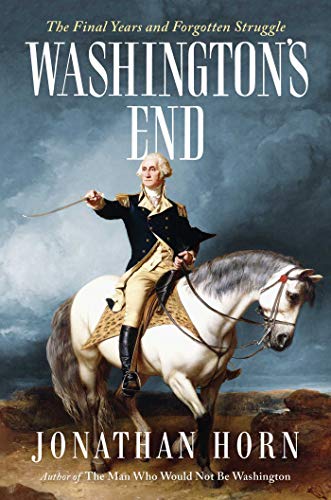 “Jonathan Horn in his new book Washington’s End provides a captivating and enlightening look at Washington’s post-presidential life and the politically divided country that was part of his legacy.”

The historical memory of George Washington frequently dims or ends at his Farewell Address in 1796, when he offered sage advice to his fellow Americans on both domestic and foreign policy. The final three years of Washington’s life, however, were eventful for the former president and the nation, and Jonathan Horn in his new book Washington’s End provides a captivating and enlightening look at Washington’s post-presidential life and the politically divided country that was part of his legacy.

Horn, a former White House speechwriter and the author of a well-received biography of Robert E. Lee, deliberately writes in the style of Douglas Southall Freeman. “[T]he biographer,” Horn writes, “should supply readers with ‘no information beyond’ what his subjects ‘possessed at a particular moment’ so as to present the past with all its uncertainties.” History, he continues, should be presented “through the eyes of those who made it rather than through the hindsight of historians.”

George Washington may be the greatest president this nation has produced, but his presidency left the country bitterly divided after eight years. Political parties formed around his subordinates Alexander Hamilton and Thomas Jefferson, and Washington, though professing to remain aloof from partisanship, increasingly sided with Hamilton and the Federalists.

The partisan divide within the government stemmed from the political ambition of Washington’s talented subordinates and from differing reactions to world events—the French Revolution and the bitter memories of the War for Independence against Great Britain.

It was that partisan divide that shadowed and ultimately undermined the presidency of Washington’s successor, John Adams. Adams faced unrelenting opposition from Vice President Jefferson and suffered from having a Cabinet whose officials were more loyal to Washington and Hamilton than to the president.

Horn shows that although Washington’s heart was with his wife and grandchildren at Mount Vernon in his final years, his mind was never far from Philadelphia, the temporary seat of the national government. He sought to both safeguard his reputation and guide the country on the course he set for it during his presidency. In his final years, Washington became what he professed never to be: a political partisan who through allies in the government attempted to influence national policy.

President Adams deeply resented this but had to tread lightly when dealing with the nation’s hero. Adams’ presidency was dominated by an undeclared naval war against France. The French Revolution had, as Edmund Burke predicted, devolved to terror at home and aggression abroad. With close to 300 American ships being attacked by French privateers, war fever was in the air in America—the passage of the Alien and Sedition Acts and calls for a standing army reflected the darkening international situation.

Horn describes Hamilton’s successful efforts through allies in Adams’ Cabinet to persuade the president to name Washington as the army’s Lt. General and Hamilton as his second-in-command. Vice President Jefferson and his political allies, however, sided with France and accused Adams and Hamilton (and indirectly Washington) of wanting to transform the United States into a pro-British monarchical regime.

At Mount Vernon, meanwhile, Washington sought to make improvements that had to wait while he was president. He oversaw more than 300 slaves, more than half of which he had acquired through marriage and that he felt helpless to emancipate. Of the hundred or so slaves that he owned outright, Horn explains, most would obtain freedom only after Washington and his wife died.

Washington also took great interest in the construction of the nation’s capital that would bear his name. He envisioned the new nation’s capital as being a bridge that would unite the country geographically, Horn notes, with canals extending east and west of the city.

Washington also worried about his place in history, and he felt betrayed by former colleagues like Madison, Monroe, and especially Jefferson who he believed, with some cause, tried to tarnish his reputation. Hamilton, on the other hand, had earned Washington’s trust.

John Adams, as Horn notes, did not see it that way. Adams viewed Hamilton as a manipulator of Washington who was “stark mad” and had ambitions to be king. Horn appears to sympathize with that view, but that is unfair to Hamilton. Washington’s Treasury Secretary and most trusted aide helped steer the young nation through the vicissitudes of the French Revolution and wars of empire and placed the nation’s finances on the road to recovery.

In his final months, Washington derided his Jeffersonian political opponents as little better than the Jacobins of France. Horn ends the book with Washington’s death on December 14, 1799. He suffered from a severe throat ailment that the physicians’ treatment of bleedings did not alleviate and probably worsened.

One of Washington’s best biographers, James Thomas Flexner, called Washington the “indispensable man.” The American experiment in democratic self-rule would not have happened without him. Washington’s intense political partisanship revealed in Horn’s book does not detract from his legacy. Washington was not some marble figure who stood above the fray while others fought political battles. Like another great soldier-President Dwight Eisenhower, Washington understood the value of appearing politically aloof while carefully promoting his political agenda.

Finally, Horn’s book should dispel the notion that we live in extraordinarily partisan times. Fierce political partisanship has a long history in this country. We survived it in the 1790s and will survive it today.