From Warsaw with Love: Polish Spies, the CIA, and the Forging of an Unlikely Alliance 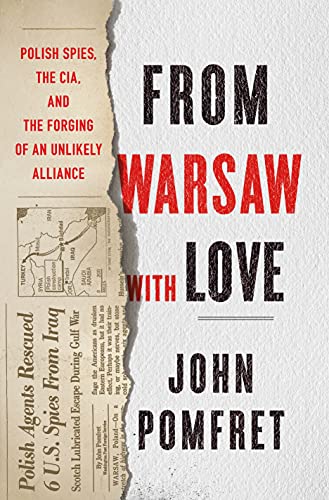 “Pomfret’s book focuses on the relationship between the intelligence services of Poland and the United States after the end of the Cold War. Spy agencies that once ‘fought’ one another during the Cold War became what Pomfret calls ‘unlikely allies’ in the post-Cold War world.”

For many Poles, the United States’ betrayal at Yalta near the end of the Second World War consigned their country and people to more than four decades of communist rule. But as John Pomfret notes in his new book From Warsaw with Love, communism never took root in Poland. And this fact was never more manifest than during Pope John Paul II’s first trip to Poland in June 1979, one of the first “acts” in the beginning of the end of the Cold War.

Pomfret’s book focuses on the relationship between the intelligence services of Poland and the United States after the end of the Cold War. Spy agencies that once “fought” one another during the Cold War became what Pomfret calls “unlikely allies” in the post-Cold War world.

But in truth, that alliance was not really all that “unlikely.” During the 1980s, as Pomfret notes, the Reagan administration provided covert assistance to the political opposition in Poland, most notably the Solidarity trade union movement led by Lech Walesa. When the Berlin Wall fell and the Soviet empire crumbled, Poland’s new leaders knew that America had helped them gain their independence and freedom.

And US intelligence officials and officers, such as John Palevich, who had grown to respect the talent and professionalism of Polish spies even under communism, knew that Polish intelligence services could be useful in managing the end of the Cold War peacefully and in navigating the post-Cold War world, especially in Europe. Palevich had successfully recruited Polish agents, including Polish Army Colonel Ryzard Kuklinski, who, Pomfret notes, “passed the CIA thirty-five thousand pages of classified documents” related to Moscow’s strategic plans, weapons systems, and spy satellites.

Pomfret describes how the US used Polish intelligence operatives to search for “loose” nuclear weapons in the former Soviet Union; to gain information about the political situations in other countries in Central and Eastern Europe; to help rescue American embassy personnel in Iraq after Saddam Hussein’s forces invaded Kuwait in August 1990; to obtain political and military information in North Korea, Cuba, Nigeria, Angola, Iran, and Palestinian-controlled territories near Israel.

The US intelligence community and the post-Cold War Polish intelligence service (the UOP) established what Pomfret calls a “special relationship.” Poland’s UOP worked regularly with the CIA, NSA, DIA, and military intelligence. The Poles had invaluable sources in post-Soviet Russia and other former republics of the Soviet Union. They provided the US with early intelligence, for example, on the rise to power in Russia of Vladimir Putin.

One reason why Polish leaders accommodated so many US requests for intelligence assistance, was that they wanted to join NATO. NATO expansion became a political issue in the United States after the Soviet empire fell apart. The George H. W. Bush administration was against it. But Bill Clinton gradually came to favor it, principally, Pomfret contends, for domestic political reasons—the Polish American vote in key battleground states. NATO expanded in the early 1990s—and the first new countries to join were the Czech Republic, Hungary, and Poland. Yalta had been reversed.

Within Poland, there was controversy over whether to use former communist intelligence operatives who had helped the Polish communist regime repress ordinary citizens. This internal debate continues to this day. And Pomfret notes that US intelligence officials urged Poland’s new leaders to put aside the quest for vengeance and to make use of the knowledge, talents, and experience of those ex-communist agents, which Poland did.

Pomfret contrasts the prudent counsel of the George H. W. Bush administration with the George W. Bush administration’s de-Bathification in Iraq after the US invaded that country in 2003. Polish leaders and intelligence officials supported the US invasion and helped on the ground, but they could not understand, Pomfret writes, how America’s leaders failed to learn from history—failed to replicate the success of Poland in Iraq.

Poland’s onetime ambassador to the United States Jerzy Kozminski, observing the US occupation of Iraq, stated, “It was like they’d forgotten history. . . . They wanted to wipe the slate clean.” Pomfret suggests that had the US followed the Polish example in Iraq—maintaining the army, security forces and police and allowing Bath Party officials to regroup and participate in post-Saddam Iraq—the Iraqi occupation may have succeeded.

Poland also agreed to host so-called “black sites,” where CIA agents subjected Islamic terrorists to “enhanced interrogation” techniques as part of the Global War on Terror. Pomfret notes that these operations were subsequently exposed in both Poland and the United States, causing much internal debate in both countries. Although Pomfret writes that it is “unclear whether the CIA gained any actionable intelligence in the Polish [prisons]” using enhanced interrogation techniques, both US and Polish intelligence officials claimed that they did.

Pomfret claims that in the 2010s, the United States “disengaged from Poland to the detriment of Poland’s democracy and of the alliance as well.” He blames the “right-wing” Law and Justice Party in Poland and both the Obama and Trump administrations for this development. He is particularly critical of Trump, which is par for the course for anyone who writes for the Washington Post. Yet even Pomfret acknowledges that Poland has “remained the most consistently pro-US nation in Europe,” and Trump remains very popular there.

Pomfret closes with “lessons” from the US-Polish intelligence alliance: alliances are not optional; choose allies wisely, and know what makes alliances last. Sound advice, as the US-Poland alliance has demonstrated.