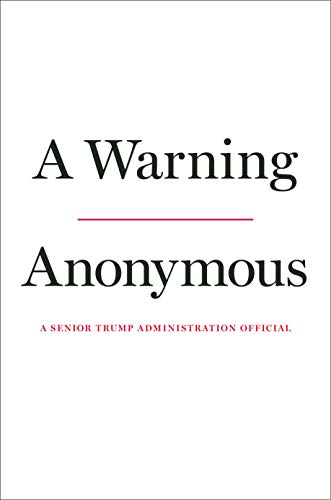 The author Anonymous identifies him/her-self as “a Senior Trump Administration Officia,l” and the book allegedly documents the inner workings of the White House under President Donald Trump.

The author published an unsigned op-ed in the New York Times in September 2018—"I Am Part of the Resistance Inside the Trump Administration”—that warned: “Many of the senior officials in his own administration are working diligently from within to frustrate parts of his agenda and his worst inclinations.” The “whistleblower’s” op-ed helped launch the House of Representatives’ inquiry into Trump’s actions with regard to the Ukraine that culminated in the president’s recent impeachment.

The book, however well-intentioned, is a lamentation by a traditional Republican who ostensibly joined the Trump administration in an apparent senior position out of civic duty only to become disillusioned in the face of Trump’s ever-increasing personal and political irrationality. S/he claims to represent the political “Steady State”—as opposed to the “Deep State”—of traditional Republican and Democratic bureaucrats that long ran day-to-day federal administrative operations.

The author details his/her approach to the book: “I have deliberately limited my descriptions of fellow senior officials, and where possible I have avoided discussing their actions and opinions by name.” And so, a reader must trust that the author’s reconstruction of meetings and conversations are not only accurate but truthful to the intent of all the participants.

In the face of Trump’s irrationality and growing rightwing political tilt of the administrative leadership, the author discusses how, early on, s/he and other officials regularly compared notes and shared their growing disillusionment. The author discusses how, although they grumbled and called for a mass resignation, they held their collective noses, and struggled on in the name of maintaining the Steady State.

The author spends much of the book detailing Trump’s irrationality. At one point, s/he notes, “He [Trump] stumbles, slurs, gets confused, is easily irritated, and has trouble synthesizing information, not occasionally but with regularity.” And warns, “Those who would claim otherwise are lying to themselves or to the country.”

In one episode, s/he reminds readers that Trump repeatedly attacked Sen. John McCain, assailing his military service and refusing to place the U.S. flag at half-mast in McCain’s honor when he died; the author discusses Trump’s effort to designate migrants as “enemy combatants” and send them to a prison camp in Guantánamo Bay; and, in the wake of the Parkland, FL, mass school shooting, the author reminds readers that Trump proposed that teachers be given guns.

S/he also details how administrative officials were forced to dumb down presidential briefings in the face of Trump’s inability to either seriously read or intellectually consider rigorous policy papers. Full reports were reduced to PowerPoint presentations and then further shrunk to a couple of simple declarative slides detailing one or two main points. As s/he admits, presenters would “come in with one main point and repeat it over and over again,” often accompanied by vivid graphic images that the president could understand.

Most ominous, the author documents how over the last three years, Trump administration officials have steady migrated from well-intentional Republican bureaucrats to self-serving sycophants or who the author dubs these loyalists the “Apologists.” Those now serving the commander in chief proclaim their unquestioning loyalty to Trump in order to garner as much potential financial reward as possible.

Anonymous saturates his/her book with numerous quotes and arguments from classical figures like Plato, Aristotle, and Cicero as well as innumerable Founding Fathers, including Alexander Hamilton. These citations are intended to frame her/his argument and dramatically reveal how far Trump and his presidency have strayed from “classical” liberal polity. While instructive, the citations seem designed to reveal the author’s educated background then to illuminate the failure of the Trump presidency.

Looking back, the author laments how the first three years of the Trump presidency has played out. “I was wrong about the ‘quiet resistance’ inside the Trump Administration,” he admits. “Unelected bureaucrats and cabinet appointees were never going to steer Donald Trump in the right direction in the long run or refine his management style. He is who he is.”

The author seems unable to fully understand or accept Trump’s inherent irrationality and the shortness of his attention span as his character. S/he keeps wanting him to be different, more like other recent presidents. But he’s not! And not accepting this prevents Anonymous from appreciating his appeal to his electoral base.

Anonymous even doubts whether his plea in the Times op-ed was “effective, let alone sustainable.” He admits that it now “feels more hollow than it used to” and acknowledges that his fellow supporters of the “Steady State” “are not bulwarks against the president and shouldn’t be counted on to keep him in check.”

More troubling, readers of A Warning must ask why Anonymous remains anonymous? Trump and Congressional Republicans involved in the impeachment hearings repeatedly call for him/her to be exposed, to stand up and defend his original op-ed. So why when after his/her initial comments no longer carry any real weight has Anonymous not come forward and taken up the political battle s/he details in A Warning?