War at the Wall Street Journal: Inside the Struggle To Control an American Business Empire 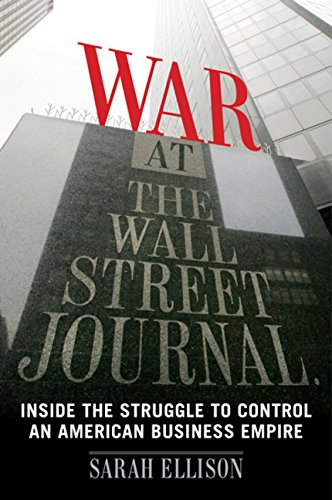 In 1990 Wall Street Journal reporters Bryan Burrough and John Helyar wrote Barbarians at the Gate, the account of the leveraged buyout of RJR Nabisco. Since then, the corporate takeover story has become our national tribal narrative, our Bullfinch, our myth of titans.

With War at the Wall Street Journal, the worm has finally turned—another Journal reporter, Sarah Ellison, has penned the account of the takeover of her newspaper and its parent company, Dow Jones. And, depending on which side of the deal you were on, News Corporation’s CEO Rupert Murdoch—who didn’t so much acquire Dow as took it—is Ms. Ellison’s Beowulf, or perhaps Grendel if you were one of the numerous Bancroft family members who were once majority shareowners of Dow.

Regardless of their plots, all stories, it is said, begin with one of two central premises: a man comes to a town or he goes on a journey. Rupert Murdoch came to town, New York to be exact, in 1988 where for the next five years he spent the unhappiest years of his life. “It was the only time in his adult life that he lived in a city [where] he didn’t own the newspaper,” noted his former general counsel.

That ended when he re-acquired the New York Post, but Murdoch was always gunning for either of the two crown jewels of American journalism, the Journal or the New York Times. Because of its conservative editorial page, Murdoch had always preferred the Journal. “I’d love to buy the New York Times one day,” he once told a crowd of admiring executives. “And the next day shut it down as a public service.”

But Murdoch went after Dow Jones, offering an extraordinary price of sixty dollars a share when it was trading at thirty-six. Such a move belies the image of Murdoch as the destroyer of journalism. On the contrary, he is an ink-stained wretch to his marrow and one of the most plugged-in businessmen on the planet—as this book aptly demonstrates. The central drama of the book, if one dares call it that, are the feeble attempts by the Bancrofts to preserve editorial independence at the Journal while cashing in on Murdoch’s offer. As one participant in the acquisition noted “We’re all trying to put Murdoch in a straitjacket, wrap him in chains, put him inside a lead box and drop it into the East River. And five minutes later he will be standing on the bank, smiling.”

There is a distinction of course between the Wall Street Journal and its parent company Dow Jones, of which the Journal was but one part. But the Journal had some 250 editors and reporters, a self-regarding “best and brightest” collective that would make the egos of the College of Cardinals seem modest by comparison. The newsroom was the factory that gave the Journal its unique product and brand (a word journalists hate when applied to them)—the corporate story, an amalgamation of shoe-leather reporting, analysis, gossip, and armchair psychology. If in business you wanted data, you could go to a company’s 10-K, stock research reports, or the Bloomberg wire service. If you wanted a good read with a few scoops, you went to the Journal, which always included the “nasty bits” in its stories.

And what are the nasty bits here? Ms. Ellison provides us prime examples, as if the Journal’s stylebook lies in her lap as she types: Murdoch’s second wife Anna describing her recovery from divorcing the mogul as “coming out of a deep mental illness;” the mocking of third wife Wendi’s heavy Chinese accent by the other mothers of the Upper East Side school the Murdochs’ daughters attended; even the VIP lounge of the Prague airport (pleather seats, surly waiters) and New Paltz, New York (“raggedly upscale,” whatever that means) get pierced by Ms. Ellison’s knitting needle. She also seems to have a thing about hair, whether it’s thick and dark, thinning, salt-and-pepper, youthfully short, or carefully tended blonde—as we find out about five different people by page 71.

Fundamentally, despite the high-church, public-service rhetoric of professional journalists, news stories are constructed as entertainments. We crave the nasty bits and Ellison reliably delivers them. The authorial strategy is to bring the rich and high-powered down to a level we can snicker at—the Tom Wolfe tactic. Characters have bad skin and awful manners, some are toadies, other sneaks. They’re not like you or me—except for the fact they are exactly like you and me.

A writer, however, has to be careful with those nasty bits. They are the devil’s candy and as such can be as harmful to its dispenser as its recipient. In this regard, Ellison has editorial cavities. On page 49 we learn that Journal editor Marcus Brauchli is 44 years old. On page 87, one year later, we then learn he is 45.

These are small quibbles. Ms. Ellison’s writing is far more disciplined than other Wall Street Journal reporters who have put their bylines on books. (I’m thinking of former Journal Detroit bureau chief Paul Ingrassia’s Crash Course, whose prose is so annoyingly casual and jokey it seems he is auditioning for a writing gig on Letterman rather than documenting the demise of a once-premier U.S. industry.) She has also devoted more than ten pages to documenting her sources in a time when other journalist-authors ask us to accept their omniscience without footnotes. As some literary sage once noted, “A good read is a good read.” War is a good read, as you would expect of any Journal story.

War’s best parts are those concerning the large, far-flung Bancroft family—particularly Billy Cox, Elizabeth Chelberg, Leslie Hill, and Mike Hill—which through interlocking trusts controlled Dow Jones and the Journal. Though well intentioned in their attempts to preserve the editorial integrity of their newspaper in the wake of Murdoch’s acquisition assault, the Bancrofts brought slingshots to a corporate gunfight. It is sad but instructive to see amateurs go up against the professional dealmakers from Wachtel Lipton, JPMorgan Chase, Merrill Lynch, and of course Murdoch himself. And always hovering over the proceedings is the other great newspaper family, the Times’ Sulzbergers—competitors, potential acquirers, doppelgangers to the Bancrofts.

Yet the Brancrofts get the better end of the deal: plenty of cash to fund their pursuits, none of which entailed journalism. Murdoch is left trying to solve the riddle of the modern media Sphinx: What to do about the Internet and the electronic juggernaut led by Google and others that is turning print journalism on its head.