The War Nurse: A Novel 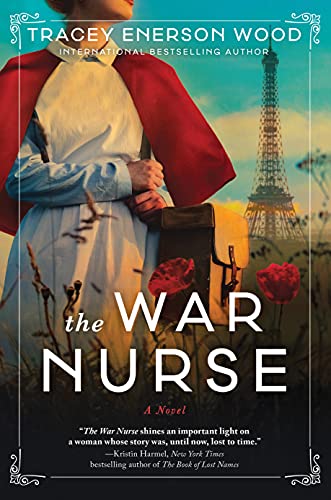 “Any readers who enjoyed the mix of romance, intrigue, and medical accuracy of Call the Midwife will love The War Nurse.”

Author Tracey Enerson Wood makes her second venture into historical fiction with The War Nurse. The novel reveals a well-researched familiarity with World War I-era medicine, though it could have benefited from a more defined internal conflict.

In The War Nurse, main character Julia Stimson enlists as a frontline nurse during World War I. After a few months of administering life-saving treatment to soldiers, she finds herself clashing against the glass ceiling and is dissatisfied with the limitations set by the male-dominated doctor class. For example, when Julia encounters a dying solder, she must perform an unsanctioned medical procedure to save his life, only to earn the rancor of the doctors. This tension increases throughout the book until Julia must find a way to warn others about the dangerous new influenza pandemic before it is too late.

During this time, Julia meets her love interest, Fred, one of the doctors she works with. Because Julia has spent her career holding her own against the doctors, a conflict emerges where Julia needs to learn how to let other people past her well-defended exterior.

Marie Curie, the first woman to win the Nobel Prize in Physics, also plays a role in the book. Many know Marie Curie as a trail-blazing physicist, but few know she also played a huge role in bringing accessible X-ray machines to soldiers on the frontline. Julia runs into Marie Curie on several occasions, and the Nobel Prize-winner becomes a mentor, telling her “Promise to put love first. Without love nothing else matters.” In this way, Marie Curie functions as Julia’s reflection, to show what Julia could become if she overcomes her internal conflict between her heart and her career.

The attention to medical detail sells the authenticity of the story. Readers will learn about some of the first X-ray machines, the effect of poison gas on a soldier’s lungs, and the heightened risk of an emergency medical procedure. Readers—both medical professionals and the uninitiated—will appreciate Julia’s extensive knowledge of medicine.

An interesting note—the author refers to the influenza outbreak of 1918 simply as “influenza” when most historical accounts refer to it as the Spanish Flu. After similar discussions took place in 2020 on how we should refer to the COVID-19 virus, it seems wise to avoid associating a disease with any supposed nationality.

The story could be improved, however. A plot point occurs around 30% through the novel, when Julia picks up her brother Phil from the hospital. This is the first time we are hearing about her brother, and Julia stops the story to tell us exactly what the brother is like and exactly how we should feel about him, saying “I adored my younger brother. I had encouraged him to become a physician when it was clear I could not. He had both a wacky sense of humor.” This would have gone better if we introduced the brother earlier in the story and showed his character through actions so that readers will be more invested when he is injured later on.

The biggest reservation with the book is the development of Julia’s inner conflict. The story states that Julia became a nurse to escape the shadow of her misogynistic preacher father. This could be further examined through her interior monologue, flashback, and her dialogue with characters like Phil or Fred. The story would come to a very satisfying conclusion if this inner conflict is resolved.

Right now the opening chapters are told in summary, and the story could be improved by increasing the narrative proximity right away to make it feel more immediate. Julia, as a first-person narrator, could have a more distinct voice through a greater variation of sentence structure, the inclusion of more rhetorical devices, and descriptions that convey a certain mood.

Overall, The War Nurse is an incredibly well-researched historical fiction novel with a sympathetic heroine. The book would have benefited from taking a deeper look at the main character’s internal conflict. Any readers who enjoyed the mix of romance, intrigue, and medical accuracy of Call the Midwife will love The War Nurse.