War on the Border: Villa, Pershing, the Texas Rangers, and an American Invasion 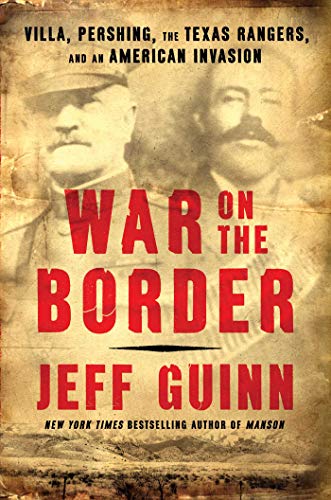 “does a marvelous job of presenting this nearly forgotten military action in the context of early 20th century of Mexican and American politics . . .”

The United States has always had a complicated relationship with its Latin American neighbors, especially Mexico. This was especially true at the beginning of the 20th century, when political turmoil in Mexico and the American response almost led to open war between the two countries. This saga, leading up to America's last military action in Mexico, is marvelously captured in this new book by Jeff Gunn, chronicling the political, economic, and military events of this mostly forgotten action by the United States just prior to its entry into World War I.

Mexico in the early 20th century was nearly what would today be termed a failed state. Years of political turmoil had left no clear government, and the various factions vying to be recognized as the legitimate rulers would today be termed regional warlords. The ever-shifting alliances and betrayals among Francisco “Pancho" Villa, Venustiano Carranza, Victoriano Huerta, and Alvaro Obregon could only be truly understood with a complicated Venn diagram, although the author works very hard to explain the ins and outs of Mexican politics and their ultimate effect on what becomes a dual crisis with America.

Mixed in with internal Mexican political turmoil were racial and cultural suspicions and hatred between Anglos and Hispanics along the Mexico-American frontier, where the ill-defined border led to frequent attacks on ranchers and small farmers by bandits and outlaws on both sides of the border. The attacks on the American side were met by equally harsh actions by vigilante and essentially paramilitary groups like the Texas Rangers that frequently did not distinguish between civilians and bandits.

The first crisis occurred in 1914 at the port of Veracruz with a seemingly innocuous incident that quickly escalated into a full-blown diplomatic crisis that almost started a war. The prickly nationalism of Mexican President Huerta and the stubbornness of US President Woodrow Wilson exacerbated the crisis as neither side wanted to appear weak and the crisis was only resolved when Venustiano Carranza seized power and worked out a deal with Wilson to end the American occupation of the city.

The greatest crisis with the US began with Pancho Villa raiding US ranches and commercial interests along the US-Mexican border, hoping to precipitate an American military response into Mexico to rally Mexicans to his side against his political rival President Carranza. When he lead a raid on the town of Columbus, New Mexico, on March 9, 1916, he got his wish. President Wilson, nearing a Presidential election and not wanting to appear weak, dispatched thousands of US troops on a "punitive expedition” to capture Villa and destroy his band of raiders.

Led by General John J. Pershing, this force combined elements of the 19th and 20th century US military, mixing horse cavalry, the first major use of trucks for logistical support, and the first attempted use of airplanes of scouting and reconnaissance. The force also included a headstrong young lieutenant named George Patton who quickly made a name for himself with an impetuous military action that almost ended in disaster.

Of course, like many intended counter-insurgent actions, Pershing's troops alienated the Mexicans they encountered, enraged the government of President Carranza, and nearly started a war when US troops encountered Mexican troops at the town of Carrizal and engaged in an extended firefight that lead to the capture of 24 Americans. As Mexican troops rushed north to contain and nearly surround the American troops that were at the end of a very long and tenuous logistical chain, both sides again decided to step back from the brink. Re-elected in a very close 1916 campaign, President Wilson now turned his complete attention to the imminent American entry into World War I and decided to provide a face-saving exit strategy for both countries, desperate to avoid a war along the southern border as the Germans again unleashed unrestricted submarine warfare in early 1917.

The author does an excellent job of placing all these events into perspective for one of the most famous events in American diplomatic history, the interception of the Zimmermann Telegram. This telegram, sent from the Imperial German government to President Carranza, offered the potential for Mexico to regain territory lost during the Mexican War by going to war with America.

This telegram was not some spur of the moment decision, but the culmination of years of cultivating a relationship with Mexico by the German government, particularly in the early 20th century, with German military advisors serving with some of the various Mexican factions as they vied for power. President Carranza wisely ignored the telegram, but its decoding and handoff by the British government to President Wilson was a key factor in the decision to declare war on Germany in April 1917.

The Villa Expedition was America's biggest military action prior to World War | and the biggest conflict with Mexico since the Mexican War of 1846–1848. Although it was eventually resolved without the capture of Villa, who was gunned down by political rivals in 1923, it set the stage for American military intervention throughout the region in the 1920s and 1930s, leading to continuing issues of distrust by Latin America of their more powerful neighbor to the north. This volume does a marvelous job of presenting this nearly forgotten military action in the context of early 20th century Mexican and American politics during this crucial period of history.