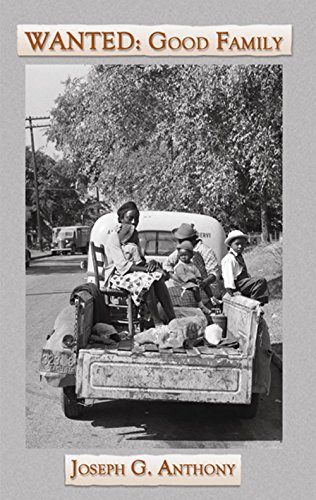 “a very good book . . .  an accessible and informative treatment of an important period and topic.”

In the early 20th century, millions of African Americans left the rural South and headed north. While city life was not easy, the industrial jobs and culture of the cities were generally preferable to the poverty and racism of the Jim Crow South. But at the individual level the larger migration pattern had exceptions.

The cities were crowded and dirty, and the clean air and simplicity of farm life remained appealing to some of the migrants. Joseph Anthony’s Wanted: A Good Family takes on the curious story of the families that left the poverty and racism of the rural South for the relative opportunity of urban life, only to reconsider sharecropping.

Although a novel, Mr. Anthony’s work appears to be well grounded in Kentucky’s history, cultural geography, and material culture. The book was, in fact, inspired by a real ad for a sharecropping family that ran in a Kentucky newspaper in 1948.

The novel is built around two families: The Johnsons, a black family with four small children that emigrated from rural Kentucky to Lexington; and the Lawsons, an older white couple with no children left on the family farm.

The relationships between the families are complex but promising. Despite the racism that surrounds them, the Johnsons and Lawsons treat each other with great decency. A friendship, of sorts, develops over the course of the first half of the book.

But the outside world and the past catch up with the families. Racist whites kill the Johnson’s livestock, and black neighbors beat up the Johnson’s children. It turns out that the Lawson family has a terrible secret that spurs the violence.

While Wanted: A Good Family is very much a book about race and racism, Mr. Anthony avoids oversimplification. Old Klansmen seek redemption; genteel whites, too polite for overt racist statements, demonstrate their racism through subtle acts. People from both races are capable of generosity and contrition on the one hand, violence and pettiness on the other.

The book chapters occur non-sequentially between 1928 and 1948, and the major characters take turns narrating. The back-and-forth progression and multiple voices give Mr. Anthony additional opportunities to bring complexity into his narrative. Narrators do more than just tell a story, they comment on each other and each other’s stories.

For all of its realism, there may be an over-supply of melodrama in Mr. Anthony’s plot. Every adult, it seems, has a hideous secret; every relationship is a Titanic blindly steaming toward a collision with a terrible iceberg, (i.e., a secret incident from a tragic past).

The melodrama and star-crossed relationships give Wanted: A Good Family an almost Shakespearean quality. In most circumstances, this would be a compliment, but in this particular case, it undercuts the realism of an otherwise admirably realistic book. Even in the Jim Crow South, some lives must have been free of existential crisis.

Ultimately, Mr. Anthony has written a very good book, even while stumbling under the burden of trying to write a perfect one. In balance, Wanted: A Good Family is recommended as an accessible and informative treatment of an important period and topic.