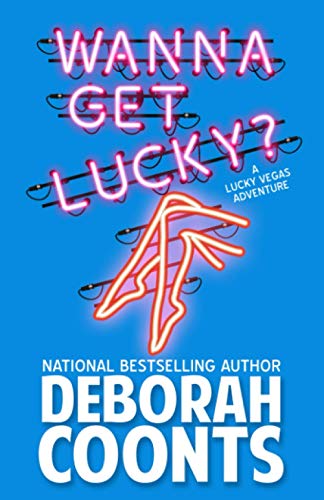 Lucky O’Toole has a job that some people would kill for: head of Customer Relations at the Babylon, the biggest, poshest casino/hotel in Las Vegas.

In any other setting, her work would include making sure the guests have enough towels and the ice machine gets repaired promptly. But this is Sin City, an over-the-top, 24/7 world of hookers, tourists, gamblers, and grifters on the make.

Which makes her new assignment even more demanding than usual: keeping the Babylon’s “Big Boss” from getting framed for murder.

It starts the night a girl named Lyda Sue Stalnaker falls to her death in the middle of nearby Treasure Island hotel’s Pirate Lagoon—during the evening pirate show—from the Babylon’s helicopter. Lucky’s quickly on the job doing damage control, blackmailing the local television station into turning over the video of Lyda Sue’s fall, and trying to find the missing helicopter and its pilot. Things go from bad to worse when the video reveals that the Big Boss was sitting in the helicopter right next to the ill-fated Lyda Sue.

There’s romance as well as mystery here, with an assortment of sexy guys up for the taking. Tops on the list is Teddie, Lucky’s best friend, who’s completely head-over-heels in love with her—as well as being a show-stopping female impersonator! Add sexy (but suspicious-acting) hotel security guy, Paxton Dane; an earnest young cop named Romeo; and Irv, an old flame who runs the Athena, a rival hotel—and there’s plenty to distract our heroine.

The story is fast-paced and frequently funny. Coonts was clearly influenced by Janet Evanovich’s work, but has sidestepped the mundane world for the pure fantasyland that is Vegas. Lucky doesn’t worry about paying the rent, no cars are destroyed, and Coonts works a bit too hard to tie all the plot threads up into neat little bows. Despite a niggling sense that the conclusion here is a little too good to be true, the book does lay a solid foundation for the Lucky in Vegas series, introducing a broad and interesting cast with plenty of potential for future criminal and personal mayhem.

Be warned: This lighthearted mystery debut may just make you long to throw caution to the wind, drive straight to the airport, and hop a bargain flight to Vegas.