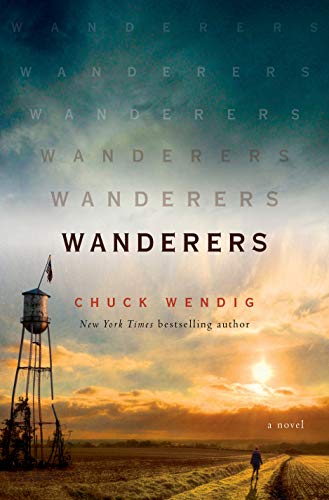 Wanderers is an epic tour-de-force that invites comparison to Stephen King’s The Stand and Emily St. John Mandel’s Station Eleven. It is quite simply the novel Chuck Wendig was born to write.

The plot appears simple on the surface: a strange new disease appears, causing people to wander as if sleepwalking. Except there’s so much more to it. The sleepwalkers aren’t exactly wandering at all, instead they follow a definite route, one designed to protect them, avoiding major cities and highways. Also, they are suddenly made immune to disease, weather, hunger, fatigue, their skin virtually impenetrable (except to bullets). If their constant, steady movement is obstructed in any way, they superheat and explode like a bomb with biological shrapnel.

The CDC is dispatched to determine if this is a natural disease, an act of terrorism, or something else not ever seen or imagined before. The media and politicians exploit the sleepwalkers, either damning them as dangerous terrorists, threats who should be destroyed, or proclaiming their humanity as deserving of protection. Fringe groups recruit new followers by villainizing the silent walkers as well as the friends and family who shepherd them along their journey.

Wanderers covers a vast geographic distance, following the sleepwalkers across the country. Even more vast are the stakes, which Wendig builds masterfully through his cast of characters.

At first, it’s one sleepwalker at risk, a young girl, and her older sister, Shana, who narrates most of the story as she watches over her sleepwalking little sister. Shana is no saint, and carries a lot of anger with her, but she’s steadfast in her love and loyalty, which instantly bonds the reader to her plight.

Next, we meet Benji, a CDC investigator who’s been disgraced. His character performs the role of the babysitter in a horror movie—despite being extremely smart, he’s also naïve and tends to misread situations, lacking even basic self-preservation instincts (which is how he got into trouble at the CDC to begin with), bumbling into danger with no plan, armed with only his gut instinct and stubborn refusal to give up. It makes him a character who easily infuriates, but who also is extremely human and vulnerable as he realizes that he’s also dealing with a second threat that could evolve into a global catastrophe.

He’s alerted to this new threat by a self-aware Artificial Intelligence called Black Swan who has not only predicted the sleepwalking outbreak but also the more subtle and dangerous fungal pandemic called White Mask, which causes slow but catastrophic neuro decline, leaving those afflicted paranoid, violent, and demented. The only people immune are the sleepwalkers, making them appear even more suspicious as panic mounts regarding White Mask’s spread.

“Disease caused chaos. Strife was born in its wake. It conjured fear and paranoia,” Benji thinks when he sees the public’s terror over White Mask.

Soon, Benji and Shana aren’t merely fighting the strange disease that’s adding more and more sleepwalkers to their wandering flock, but also the non-affected who are using the sleepwalkers to further their own political agendas. There’s the Trumpian presidential candidate, his army of supporters led by a white supremacist (and which has massive arsenals of military weapons at their disposal), and the small town minister they’ve coerced into becoming the voice of their movement, using the “terrorist threat” the sleepwalkers pose to begin a race war and topple the government.

Little do they realize that taking over the government is a waste of time and effort when the real threat is the possible extinction of the entire human race.

As Benji says, “it was easy to dismiss people as ultimately a negative force—a terrible influence upon the world and upon one another . . . Ultimately, people were good. Lazy, sometimes. Maybe ignorant, maybe willfully unaware.”

Aided by an aging rock star, a former police officer with a severe traumatic brain injury, a young idealistic physician, and a host of other characters, Benji and Shana lead their flock of sleepwalkers to their final destination and a confrontation that reveals the true nature of humanity, both good and evil.

The dénouement isn’t a total surprise, but is still one that will resonate with readers long after they close the book. While Wanderers weighs in at just shy of 800 pages, it’s a journey well-worth taking and one readers won’t soon forget.