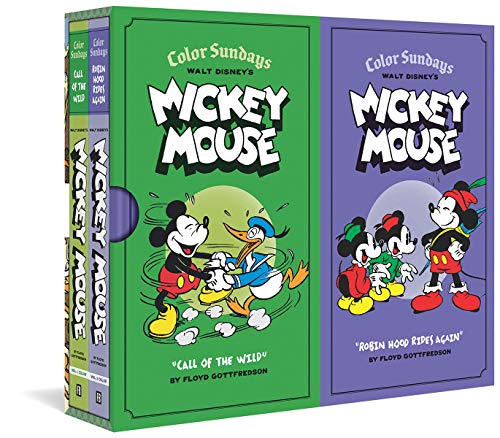 “Fantagraphics’ series is a real find for even the most casual fan.”

There is an unbridled, natural joy in great Disney art. There is just something about the roundness of Mickey’s head and those ears that we all seem to recognize, something in the way that sweat flies off Donald when he loses his temper or Pluto’s amiable, friendly gait as he wonders behind Mickey—something that touches us all.

Maybe it is the absurdity of a mouse with three fingers who wears gloves. Or the silliness of a duck who wears a sailor suit but no pants. It could be something as simple as the way that Disney automobiles tend to have crazy-round hoods and trunks.Or the sight of a big dog driving a motorcycle. The images transcend language barriers. Somehow it all makes us smile.

Most folks think of Mickey and company as the stars of cartoons and comic books. But their presence in newspapers was just as strong and the art was just as beautiful as the work created for the screen.

Much of this is due to the art and writing of Floyd Gottfredson who handled both the daily strip and the Sunday pages. He came aboard Disney’s rapidly expanding animation department in 1929.

By 1930 Walt had so much faith in Mr. Gottfredson’s skill that he turned the Mickey Mouse daily strips over to him. That faith was amply rewarded as Mr. Gottfredson gave the world a Mickey that was fearless, adventuresome, and, quite often a wiseacre. The dailies helped solidify who Mickey was in the public’s eye.

When the Syndicate came calling for a Sunday page that would equal the success of the dailies, Walt turned again to Mr. Gottfredson.

That work, some of the greatest ever seen in newspaper comics strips, has been collected in a series of volumes from Fantagraphics Publishing. Walt Disney’s Mickey Mouse Color Sundays Gift Box Set (Vols. 1&2) contains six years of those early pages dating from January 1932 until December 1938.

In addition to this complete run of Mr. Gottfredson’s work, editors David Gerstein and Gary Groth have included a number of enlightening essays was well as quite a bit of extra pages that Mr. Gottfredson either drew or supervised which go into the early sixties.

The collection is a celebration of some of the best art and stories that the Disney ever produced. Not matter how much you know about Disney cartoons, there is a surprise on every page. Even though some of what is reprinted in these volumes overlaps with cartoons produced by Disney at the time, every single page is fresh and seems to be brand new.

Mr. Gottfredson’s art on the dailies helped solidify the way that the public saw Mickey. A mouse who was an adventurer, a thrill seeker and a bit of a wiseacre. But the demands of the Sunday page called for something different. In addition to extra panels and a new rhythm to the narrative, Disney cartoons were still appearing on screen in black and white.

This meant that a coloring scheme had to be decided upon. The only real coloring of Mickey and other characters had been done for toys, boxes, and magazines. The cartoons featuring Mickey and his pals wouldn’t get the technicolor treatment until 1935. At the time it wasn’t unusual to see Mickey wearing green shorts or yellow gloves.

Also the audience for a Sunday page was much larger than a daily, which led to a way that the characters on the Sunday page were portrayed. This led to a greater relationship with the animation department than Mr. Gottfredson had when he wrote and drew the dailies. Both Walt and the Syndicate saw an advantage in using the Sunday page to help promote upcoming cartoons.

This led to the Sunday page moving between straight gag pages and serialized stories. In time this coordination between the two departments leads to some of the most enjoyable pages that have ever appeared in a Sunday newspaper. The adaptation of Robin Hood Rides Again is alone worth the price of admission. Mr. Gottfredson’s art celebrates everything that is good about Disney.

It's great fun to read the collection and see different characters come and go. Some, like Horace Horsecollar and Clarabelle Cow, have a strong presence in the early years. As the years pass their stock falls while others such as Donald or Goofy move to center stage. In fact the popularity of the Sunday strips that contributed to the growth of Goofy as a recognized character.

Minor characters weren’t the only ones who rose and fell over time. Near the end of the second volume Mickey’s on screen star has been supplanted by Pluto, Goofy and Donald. The newspaper adaptation of The Brave Little Tailor cartoon gives Mickey a boost in the star category.

The newspaper adaptation even cracks an inside joke about Mickey’s falling star. The story opens with Mickey as a full time actor. In the first page of the series his agent calls and tells him about the new picture. Mickey races to the studio where he bumps into Goofy and he asks the dog if he has been cast in the picture as well.

What a wonderful moment of self-awareness and self-deprecating humor in the Disney universe—qualities that, like Horace and Clarabelle, seem to have disappeared over time.

Eventually the Sunday pages lose Mr. Gottfredson as a guiding light, but he does return occasionally. The collection features examples of work he did on 101 Dalmatians, Lambert the Lion, and others that appeared until the early sixties. Featuring some of the best work ever produced by the Disney Studios, Fantagraphics’ series is a real find for even the most casual fan.