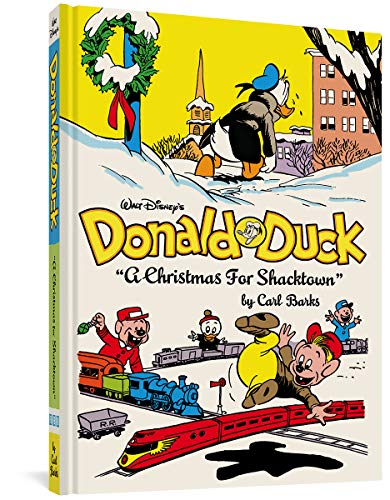 “If you love the frustrated, quacking, crazed Donald from the cartoons of the forties, you have to read A Christmas for Shacktown.”

Of all the universes, worlds, galaxies and dimensions created since the appearance of the first comic book, the most amazing of them all may be the world created by Carl Barks. Filled with ducks, pigs, dogs, and barnyard creatures, in his stories about Donald Duck, Uncle Scrooge, and the town of Duckburg he gave us something more human, more understandable, more complete, and more recognizable than almost anyone else in the field.

All you need to do is read his classic holiday story A Christmas for Shacktown to realize that he wasn’t just writing about ducks and their friends. What he was really doing was showing us the absurdity of human behavior in the same way Aesop is still teaching us lessons today.

As the story opens, Huey, Dewey, and Louie are walking down the street on their way home from school and find themselves in a part of Duckburg that is home to the downtrodden and poor. Like every city in the world, Duckburg has a hidden level of poverty that they just can’t seem to deal with.

As the three little ducks talk they acknowledge the squalor they see around them. As R. Fiore notes in his critique of the story at the end of this volume, it is a “. . . scene of impoverishment that would have sent Jacob Riis running for the Super Technica.”

In the first panel a sad little dog child looks out of the corner of her eye at the three ducks that are walking through her town. She doesn’t bear a look of envy or contempt, it is a look born of exhaustion and surrender to the world she inhabits.

In the second panel the boys talk about how the kids in Shacktown never have “. . . candy and cake and things like that!” Behind them, almost undetectable, a young boy is seen opening a garbage can to see if food can be found in there. In the third panel Mr. Barks moves message straight into the front of the reader’s vision. As the boys discuss toys a sad-eyed little girl is seen stacking empty cans in an attempt to have fun.

This is what is amazing about the work of Mr. Barks. He is drawing what are arguably the most popular cartoon characters in the world (Donald eclipsed Mickey as a fan favorite from just about the moment he stepped on screen) and yet he is putting them in the middle of a reality most would prefer to ignore.

But part of his brilliance is that he knows to not leave the reader there for too long. As sad as the background is, the real action is in the conversation of Huey, Dewey, and Louie. The three know how well off they are and they decide to do something to help those who live in Shacktown. Fewer than two pages later we see Donald. He is fretting and obsessing over having no money for the boys’ holidays. Daisy Duck stops in and informs him that her Ladies Club needs money to help the folks over in Shacktown.

The decision is made to ask Uncle Scrooge. That old bastion of capitalism and pure greed guards his money with a cannon and uses a self-propelled bulldozer to push his fortune into his vault. You know that no one is getting a nickel out of him for the poor!

The story quickly moves into Donald’s efforts to raise his end of the cash. There are few things funnier than a determined Donald Duck being frustrated time and time again. The sadness of the first three panels is quickly forgotten as we fall into a cycle of arguments, slapstick, and crazed action. By the end the nephews have helped solved Uncle Scrooge’s big problem and Shacktown gets a glorious Christmas like they have never seen before.

The stories collected in this volume first appeared during 1951–1952 in either Walt Disney Comics and Stories or the anthology title now known as Four Color. Both titles are among the most widely read comic books of all time.

The collection is over 230 pages big. Each page is fully colored and very sharp. “Shacktown” is over 30 pages long, but the average story is 10 pages. The volume concludes with a series of single page gags that showcase how Mr. Barks could construct a memorable gag in just six panels. Many of the original covers are featured in their full sized glory. The notes on each story help place the work in perspective.
This is a book that can be enjoyed by everyone from six to eighty. The characters are as familiar to us as anything in American culture could be; yet, Mr. Barks never fails to surprise and entertain us with his storytelling skill. The art, while done in the familiar Disney house style of the time, moves to another level of intimacy and detail when Mr. Barks takes up his pen and pencil.

Fantagraphics is reprinting the complete works of Carl Barks across 11 volumes. Shacktown is the second in the series. There have been three published so far with a fourth scheduled for release early next year. This is classic art and storytelling from a master of the form. Carl Barks ranks right up there with Jack Kirby and Will Eisner.

If you love the frustrated, quacking, crazed Donald from the cartoons of the forties, you have to read A Christmas for Shacktown.