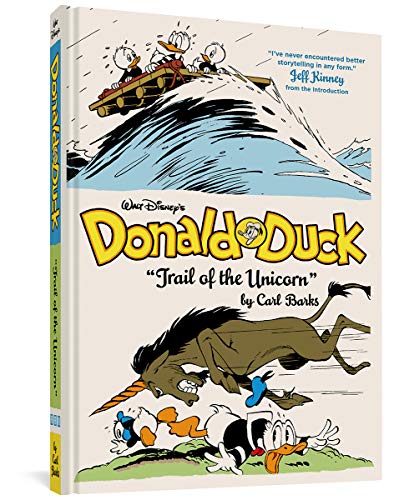 “Carl Barks has created work that will entertain children, adults, and grandparents for hours on end.”

Around the world movie theaters are filled with stories of magnificent superheroes taken straight from the pages of four-color magazines. Read Walt Disney’s Donald Duck: Trail of the Unicorn (Volume 6) Carl Barks Library and you will discover that the most beautiful and thrilling comic books ever made may actually feature ducks.

This volume mixes one page gags with action-packed stories that sometimes reach over twenty pages. They originally appeared between 1949 and 1950 in comics from Dell Publishing and are just as funny and just as exciting as anything created today.

And no matter what you may think, this isn’t just stories about talking ducks, mischievous nephews, conniving geese or stingy Scottish Uncles.

It is filled with stories about wild adventures in South America and the Canadian Northwest. There are stories of redemption, betrayal, arrogance, evil, greed, stupidity, bad decisions, crime and love.

These stories contain emotions and situations that are as real as anything ever experienced by any human who ever lived. They just happen to be told by using ducks, lots of ducks, as the focal point.

Carl Barks’ work on Donald Duck is one of the richest runs in the history of comics. This volume collects over 200 pages of pure bliss for everyone who loves adventure, humor and sheer unadulterated fun.

Yes, these stories feature silly and goofy animals doing silly and goofy things. While four year olds may laugh until tears roll down their cheeks, adults will see something so much more. They will see people they recognize, a world filled with contradictions and frustration and, maybe, even themselves.

This collection highlights why Barks’ work is so deserving of rediscovery by everyone. This is work that showcases some of the absolute best work ever found in the medium.

Humor plays a big part in what he has created. There is the amazing slapstick that would make Moe Howard and The Stooges jealous. You can also find some wonderfully wicked and sly parody and commentary inside some of his work.

In Super-Snooper Barks takes a poke at the superhero aspect of the comic industry. When the boys struggle to save the country from spies inside “Serum to Codfish Cove” an agent named Noble X. Ample from the Secret Service shows up.

The square jaw, the hat he wears, and his bearing not only make you think of Dick Tracy, but the character also deflates the self-importance of the standard government official.

Few writers were as capable of expanding on a logical premise and adding to it until it reached critical mass like Barks could. Much of Barks’ work is filled with adventure so thrilling and exciting that Steven Spielberg and George Lucas both gladly mention him as an influence on their films.

Read a good Barks’ adventure and you will discover that, just like an Indiana Jones movie, the action brings you to the seat of your chair. It starts and it builds. And it keeps building until you think the whole thing just can’t get any wilder.

Inside this this collection is the wonderful story “The Great Duckburg Frog Jumping Contest.” It opens as Donald is standing at a hot dog cart. Declaring that he is tired of buying his nephews something so simple for lunch he hauls Huey, Dewey and Louie to someplace with a touch of class, luxury.

Donald hauls the boys off to a fancy French Restaurant and orders frog legs. When they find out that the meal will be three dollars per serving they bolt. He decides to capture his own frogs and cook them himself. Everyone races down to the local bog.

The action between the bullfrogs, Donald, and the nephews is hilarious. Inside the borders of each panel Barks creates a moving cartoon.

The boys chase the frogs with forked sticks. Looking deep into the water and mud for frogs Donald falls in. He rises with a frog on his head. Trying to get the frog one of the nephews smacks Donald over the head. Donald chases the boy while the other two nephews accidently hit each other as they race after more frogs.

Everything keeps building until they all discover the largest bullfrog ever seen. From there it gets crazier until they finally capture the poor amphibian. Donald wants to cook him up but the boys tell their uncle that there is a frog jumping contest that afternoon. One with a big reward.

Greed kicks in and they race to the contest.  Naturally the contest gets out of control until the frog exposes the crooked judge. With their winnings everyone finds themselves back at the fancy French restaurant where they order hot dogs and for their new friend the bullfrog, bumblebees.

All of this happens in ten, magnificently economical pages. Barks wrote with an incredible amount of precision. Note a single line in either his art or his dialogue is ever wasted.

He could create that wild action and also touch your heart at the same time. In “Letter to Santa” he starts with a mistake by Donald and keeps going until  Duckburg is nearly destroyed during a battle between Donald and Uncle Scrooge that involves massive steam shovels.

At the end the boys find out their letter Santa wasn’t even mailed. Still they forgive their uncle because the nephews are often the most mature people in the town. Suddenly a miniature Santa drops down the chimney and grows to full size before them. It is a beautiful moment that reminds us of the joy to be found in a child’s belief in the holiday.

Carl Barks has created work that will entertain children, adults, and grandparents for hours on end.