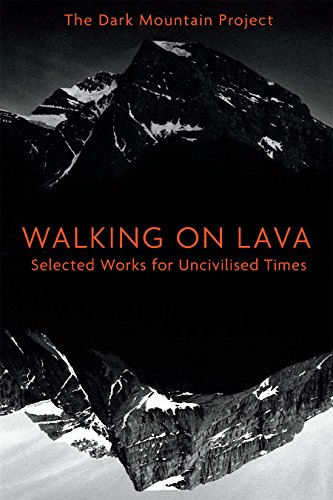 The Dark Mountain Project is a worldwide collective of writers, artists, activists co-founded by Dougald Hine and Paul Kingsnorth, dedicated to creating “uncivilized” art, poetry, prose, and more. By “uncivilized” they mean ecocentric: dissolving our dominant culture’s myths regarding human centrality in the cosmos and the notions of continual, beneficial technological progress.

Dark Mountaineers sagely encourage readers to understand how inherently unsustainable our society is, as well as acknowledging our complicity and acquiescence in propping up the system.

We are prodded to “look down,” and the founders draw inspiration from the fabulous Robinson Jeffers and the long lineage of environmentalist thought. This collection of works from 40+ writers, poets, and artists encompasses everything from a recipe for pheasant, meditations on the Mahabharata, two interviews, numerous poems (some heartfelt, some silly), and many commentaries on social and ecological collapse.

The common thread to each piece can be understood by quoting the Mountaineers first “principle of uncivilisation”: “We live in a time of social, economic, and ecological unraveling. All around us are signs that our whole way of living is already passing into history. We will face this reality honestly and learn how to live with it.”

Written in 2009, the Dark Mountain Manifesto (which appears at the beginning of this collection) attracted many readers (this reviewer included) with its fiery, polemical arguments breaking down the false narratives embedded in Western civilization. Their website and multiple journals continue their tradition, with contributors chiming in from around the globe.

Radical, sincere environmentalists though many of the contributors may be, the antennae of this reviewer were alerted with warning shocks as soon as the cover was opened: testimonials from the odious Lierre Keith and Derrick Jensen. On the other hand, kind words from Eric Utne and Kirkpatrick Sale gave a sense of reassurance.

With so many contributors, it would be insanity to review each. Highlights include Akshay Ahuja’s interview with Dmitri Orloy as well as his “Strange Children,” Carla Stang’s “Rampant Rainbows and the Blackened Sun,” Sylvia V. Linsteadt’s “Osiris,” and Vinay Gupta’s “Death and the Human Condition,” which are all brilliant.

One would think there would be more focus on practical steps in the book: perhaps a focus on permaculture, low-tech renewable energy, or homesteading. Especially since it is proclaimed in the manifesto that: “we write with dirt under our fingernails.”

Rather, the majority of works here favor the need expressed in the original manifesto (no doubt legitimate) for our culture to properly grieve for the losses in our societies and in the biosphere: the species pushed to extinction, rich ecological systems deforested and desertified, complex indigenous cultures bulldozed in the name of “progress.”

Like the original manifesto, there are tinges of fatalism and resignation in many of the essays. Grief at the impending collapse of ecosystems and society due to global warming, environmental devastation, and cultural disintegration due to neoliberal globalization should eventually lead to the next stages of processing: resistance, resilience, and initiation into a new holistic culture. The shoots of such a shift in worldview can be glimpsed in much ecocentric thought and are visible in a few of the better contributions, but they are not at the forefront here.