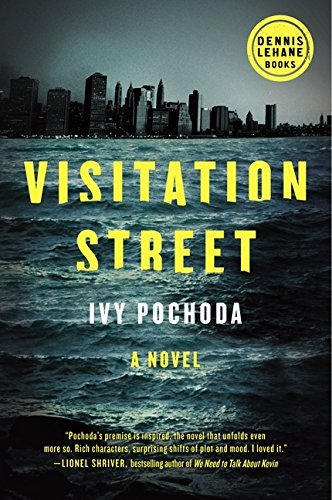 It’s easy to see why noted author Dennis Lehane chose this tale as the second book in his publishing line.

Like all noir, the fundamental emotion is suffocation and the overwhelming characteristic is grit.

Visitation Street is set in Red Hook Brooklyn, and the reader gets an eyeful of this gentrifying neighborhood. If your cruise ship docks there, chances are you’ll get a cab at the pier and speed away, spending no money in the neighborhood, completely missing the point of the gentrification.

June and Val, two 15-year-old students at the local Catholic school, are looking for something to do one hot summer night. Nothing really dangerous, but in the mind of a teenager consequences are rarely contemplated.

They take a raft out on the bay.

Only Val returns, her body found in the weeds along the shore. June’s disappearance resonates in the neighborhood, stories get told, rumors start, and life feels upended.

That’s the problem with change: It’s too slow, it’s too fast, and it’s always out of control.

Val has lost her best friend, she’s all alone at school, and she hears June’s voice in her head all the time. Cree, a boy who has a crush on her wants to comfort her, but Val is unable to allow him.

More changes ensue. Fadi, the bodega owner is counting on the cruise ship traffic to make a go of his bodega and prints a newsletter describing the entire goings on in the neighborhood. Jonathan, the music teacher at the girls’ school, is haunted by his past and tries unsuccessfully to drown his sorrows.

Ivy Pochoda demonstrates some of her most agonizingly illuminating prose on life at Jonathan’s bar. The bartender wears a shot glass as a necklace because she wants be tipped in alcohol.

Hearing the dead talk to you is an ongoing and seemingly normal part of life in Red Hook. Cree’s dad was shot and killed, and his mother still talks to him every day. Neighborhood girl Monique sings in the choir—she’s also haunted by June and the image of her the night she went missing— soon starts hearing her voice.

Whatever their dreams, the innocent teens in this book share the conviction that different equals better. They want desperately to strike out, sometimes blindly, for the chance to prove that truth.

The older folks have accepted or resigned themselves to this life and don’t look too closely at the cost.

Visitation Street starts on a high, meanders through the middle, then comes up with a truly Dickensian (one character pulls everything together) finish.