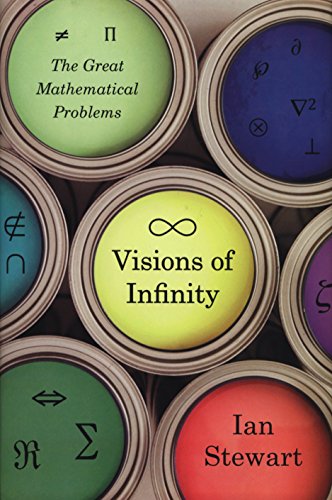 “Ian Stewart belongs to a very small, very exclusive club of popular science and mathematics writers who are worth reading today.”

Author Ian Stewart addresses open questions in mathematics, expertly placing abstract mathematics onto the solid footing of real-world problem solving. Visions of Infinity will be found by the lay reader to be both entertaining and accessible.

Ah, but the value of proof goes to the heart of knowledge. Anyone can make an educated guess. What is it hard is to prove your guess, right or wrong. “[P]roof is the only reliable tool that mathematicians have for making sure what they say is correct.”

There is value in having proof, whether in affirmation or in denial. Proof that a something in mathematics is impossible stops people from wasting their time searching for something that does not, cannot exist. The danger of not having a proof is the improper assumption of validity that may fail in a particular instance—whereupon everything depending on that assumption can go rapidly, horribly wrong.

In Visions of Infinity, Ian Stewart describes a selected set of open (and recently closed) problems in mathematics, their origins, and why they are important, placing each in historical and mathematical context. But before doing so he prepares the reader by with two problems that are merely tricky.

Pi is not only irrational but also transcendental; it cannot be represented by algebraic expression. Two thousand years passed from Euclid’s geometry to Ferdinand von Lindemann’s proof of pi’s transcendental nature in 1882.

The two problems above provide the author the means of telling a story and also provide the reader a feel for how difficult mathematics problems get solved. “When a mathematical conjecture turns out to be correct, its history often follows a standard pattern.”

Over a period of years, sometimes centuries, various people prove a conjecture to be true but only with special restrictions. With each improvement, the proof gains by relaxing the restrictions. When a breakthrough is made, a simpler and cleverer idea either completes the proof or provides a new starting point for further advances.

The first open problem offered up by Stewart is the Goldbach conjecture, formulated 250 years ago, and involves prime numbers and efficient methods of factorialization. The conjecture can be solved by computer but computer generated solutions are inefficient; the effort of working through the computations takes more time as the problem scales—in fact the universe will end before a computer finds (or does not find) a solution.

Little progress has been made—there are more efficient methods, but these methods are probabilistic, that is, they do complete but sometimes fail to provide an answer. What makes it all so interesting is that the author addresses prime numbers, scaling, and probabilistic algorithms before explaining what Goldbach’s conjecture is.

Another difficult problem that was eventually solved is the four-color theorem. This theorem, with no real use outside of pure mathematics is simple to describe. If one were to color a map and adjacent areas had to be given different colors, then only four colors would be needed. This holds true for any map; the difficulty is in finding the proof. “It took decades before mathematicians began to grasp how difficult the question was . . . the argument became so complicated that massive computer assistance was required.”

In 1976, Appel-Haken provided a proof of the four-color theorem, which consisted of 700 pages of calculations. Appel-Haken’s proof changed the problem from having a proof to analyzing a proof. Given the complexity of the solution, how do you know the proof is correct?

Proofs are valued for their mathematical beauty and simplicity and this proof was not beautiful. This was proof by exhaustion, something that addressed every possible case, which was unsatisfying to mathematicians. Even though Appel-Haken’s proof was simplified in the 1990s it still needed computers to analyze. A beautiful, simple proof is still in the waiting.

Another seemingly impossible problem came out of a digression. Johannes Kepler presented a book on snowflakes (of all things) as a gift to his sponsor the Holy Roman Emperor Rudolf II. Inside was a brief remark, a puzzle that would not be solved for 387 years. The Kepler conjecture considers the most efficient way to pack spheres. Imagine a holiday gift box of oranges—successive layers of oranges fitting into the gaps of previous layers.

This form of packing appears to be the most efficient—but the difficulty is to prove that there isn’t anything better. As with the four-color theorem, computers were needed to generate the proof.

The Mordell conjecture is another problem notorious for the ease of its stating compared to the difficulty in finding a proof. Belonging to an area of number theory called Diophantine equations, solutions have to be rational, whole, and positive.

Ian Stewart gives the reader the Mordell conjecture as a warm up for the proof of Fermat’s last theorem, first conjectured around 1630 but not solved until 1995. Readers will be entertained with the incredible effort it took to construct the proof. The magnitude of solving Fermat’s last theorem cannot be underestimated and can be compared to the first ascent of Mount Everest.

The three-body problem is not only an open problem of interest to mathematicians but also to astronomers as it reflects gravitational orbits, based on physical theory. Ian Stewart offers joke about the limitations of physical theories, “[Y]ou can tell how advanced a physical theory is by the number of interacting bodies it can’t handle.

Newton’s law of gravity runs into problems with three bodies.

Quantum theory is overextended for one body, and quantum field theory runs into trouble with no bodies—vacuum.”

The three-body is another problem that can be stated simply. Given the Earth, the Sun, the Moon, and Newton’s laws, calculate their future orbits, exactly. Mathematicians in the late 1700s were unable to solve the three-body problem, which by 1860 reached some 900 pages of differential equations. In the 1890s mathematician Henri Poincaré admitted he was stumped, saying of one equation, “One is struck by the complexity of this figure that I am not even attempting to draw.”

Stewart states, “[W]e now know that three-body dynamics is chaotic—so irregular it has elements of randomness.” That a deterministic system can express randomness is remarkable and has changed many areas of science. Computers were first used for the three-body problem in the late 1970s but it was discovered that the calculations converged so slowly as to not be practical. This spurred others to seek solutions that converged more rapidly.

If the solution to the three-body problem were impossible to solve then more complex orbits would be even more so. Take for example, our solar system. If one wanted to expand the three-body problem to include all the planets, planets’ moons and asteroids, an astronomer could be looking at a 20, 100, or even a 1000 body problem. All is not lost, however. Short-term predictions can be calculated efficiently. Short term for astronomy is 1000 years. One hundred million years would be a different matter.

Might there be hidden instabilities in our solar system where forces combine to kick out a planet or cause a collision? The answer is: maybe, maybe not. Our solar system appears to be stable for now, but the time scales for detecting instability are too far in the future to appear in modeling. Successful predictions of chaotic behavior in our solar system have been made though. Models show Saturn’s satellite Hyperion to tumble over time, which it does in real life. Mathematicians have also made computer models of imaginary solar systems with interesting choreographies of stable orbits. A few of these orbits are illustrated in the text; one example shows three stars of equal mass orbiting in a figure 8.

Mathematicians who work with “pure” mathematics have always been fascinated by prime numbers. Today, prime numbers have practical applied application in cryptography, which is important to financial transactions on the Internet. One attribute of prime number’s usefulness is their randomness. Though prime numbers appear randomly, statistical patterns do appear. Bernhard Riemann 1859 defined the zeta function to calculate the count of primes between ranges of numbers. The zeta function has one snag though: It can’t be proven. The proof of the zeta function also called the Riemann hypothesis and today is considered the most important unanswered question in mathematics.

In the end chapters the mathematics gets more “pure” and explanations of the conjectures get more complicated. The reader has to pay more attention. CAUTION: Do not attempt these chapters without possessing full alertness. The chapter “Diophantine Dreams” addresses the search for the proof of the Birch-Swinnerton-Dyer conjecture, where the difficulty won’t just be in finding a proof. It will first be in understanding just what the conjecture is. Make this chapter your own personal Mount Everest.

Ian Stewart belongs to a very small, very exclusive club of popular science and mathematics writers who are worth reading today.