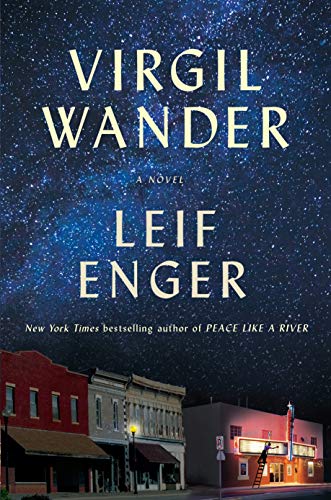 Suffering from vague cognitive deficits after his car plunges into Lake Superior, Virgil Wander must navigate the world anew. He hobbles around Greenstone, Minnesota, both as an innocent and a reluctant sage, part child and part ghost, prone to deep emotion over the simplest acts of kindness. This effective setup, in Leif Enger’s wonder of a novel, Virgil Wander, affords us a front row seat to Virgil’s discoveries. He’s only a step ahead of us—at least that’s the illusion.

After his accident, his own home feels unfamiliar: “For more than twenty years I’d felt at home, in my home. Now I stood weirdly slack in the middle of my kitchen. Everything was off.” In his quest to ground himself, he continues to work at city hall. He maintains friendships and forms new connections with townspeople, some of them taking on mythic proportions. As owner of Empress Theater, with its secret stash of classic films, he renovates the place and brings people together.

While these efforts can be a struggle, they offer ample rewards since Virgil is stolidly open in mind and heart. His new dear friend, Rune, teaches him the joy of making and flying kites. “The kite clattered and roamed about. Rune experienced sudden forgetfulness and expectation, a sense of things widening.” In fact, flying a kite creates a “current of solidarity, expectancy, a knock-wood perception of something bound to happen.”

Even ten-year-old Galen, in hot pursuit of an enormous, fabled sturgeon, leads Virgil to this quiet insight: “I wondered then and still do what giants we miss from not looking.”

Roadblocks arise, of course. Not everyone is nurturing. These roadblocks present some of the most satisfying moments in the novel, as Virgil intuits dark undercurrents in others. While greed or conceit may have rankled the old Virgil, the new Virgil becomes curious and inquisitive and even encouraging. When handyman Jerry tries to swindle tools from him, Virgil, having faced death, plays along and prods more greed in a most amusing exchange.

The roadblocks are often literal, as numerous people in Virgil’s orbit end up in car or train or plane crashes. When sweet Nadine gives her son, Bjorn, a beater with over 200,000 miles for his 18th birthday, this arouses a tension in the reader that doesn’t match the sweet intent of the gift. “Don’t get behind that wheel!” we want to shout.

Mostly, though, this lovely novel feels homespun and familiar. You might be reminded of Richard Russo’s small towns in upper New York and Russo’s brand of flawed characters. You might think of Roland Merullo and the wisdom of his mystic sages. Or the film, Cinema Paradiso, which basks in the love of handling celluloid.

In the end, Virgil’s quest for wholeness, for belongingness, requires a town effort. A village, if you will. We’re connected in ways we can’t begin to fathom. As Virgil learns, “Your tribe is always bigger than you think.”