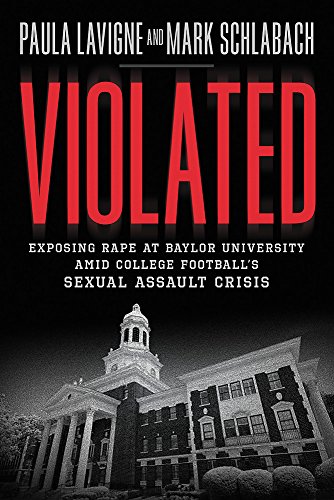 “an exceptionally good book. . . . Violated may be the honest portrayal of the seedy side of the college experience.”

America has an addiction. Forget the opioid epidemic. America’s biggest issue is its unblinking infatuation with professional and semi-professional athletics. If Karl Marx were still alive, he’d rethink that whole spiel about religion being the opiate of the masses. In the 21st century, American athletes are our priest-warrior caste—our muscular and sacral demi-gods who every weekend bring us to ignorant bliss.

Unfortunately, America’s addiction to athletics means that people who should know better worship at the feet of thugs, predators, and delinquent youths who believe that “gang rape” is a legitimate bonding exercise.

That is the story of Violated, a hard-hitting examination of how Baylor University, a private, Baptist school in Waco, Texas, experienced a rash of rapes on campus. By the end, Patty Crawford, the Title IX coordinator for the school, found that her office had handled 400 accusations of sexual assault and rape. Crawford found that 10 percent of the cases involved the Baylor football team. That may sound like a small percentage, but in actuality football players were overrepresented because they only account for four percent of the overall student body. Despite these cold, hard facts, Baylor football fans, the school’s regents, and administration kept their eyes closed to reality until it was no longer possible.

According to writers Lavigne and Schlabach, a few Baylor players stood out as oversexed monsters. On April 14, 2012, Jasmin Hernandez was raped twice by Tevin Elliott. The six-foot-three, 250-pound Elliott pretended to escort the intoxicated Hernandez to her friends, but wound up forcibly penetrating her twice near a woodshed and by a pool. This all went down at a crowded house party hosted by another Baylor football player.

After seeking and failing to find justice (one of the themes of this book is that the Waco Police Department and the Baylor Police Department can best be described as incompetent boobs), Hernandez and other accusers used Title IX to expose the fact that Elliott was a serial rapist with crimes that stretched back to his freshman year in 2009.

Other cases highlighted in this book include the one against Shawn Oakman, who had a history of physically attacking women, and Sam Ukwuachu, a football player who was allowed to transfer to Baylor from Boise State even though his time in Boise was riddled with suicidal threats and accusations of physical assault. All of these inconvenient facts were covered up by football coach Art Briles and university president Kenneth Starr (yes, that Kenneth Starr) simply because they had promised Bears fans a national title.

Lavigne and Schlabach should be commended for not only exposing the dangers of American football worship, but for also highlighting the stories of the victims. These women, many of whom were student athletes themselves, suffered unimaginable horrors, even including parties wherein they were drugged and systematically raped by several football players. Many of these women had their horrible nights recorded by the cellphones of cackling football players who did nothing to help.

As clear-eyed as this book is, Lavigne and Schlabach sometimes tiptoe around truly explosive topics or rely on outright falsehoods. For instance, Violated gets good mileage out of the statistic that one in five American undergraduate women will suffer sexual assault. This statistic comes from a 2007 study conducted by the Justice Department’s National Institute of Justice. This survey only focused on just two universities and received very limited support in terms of student responses.

Overall, 12.6-percent of students out of a body of 1,073 experienced attempted sexual assault. As bad as this is, the often repeated one in five statistics, if true, would make American colleges more dangerous for women than war-torn Congo. Also, although it is brought up once in the context of the trial of football player Jeremy Faulk, Violated tries very hard to avoid the issue of false rape allegations and the fact that Title IX trials held on college campuses can be akin to kangaroo courts.

Finally, the biggest elephants in the room are race and college drinking culture. All of the major rape cases in this book deal with black football players raping mostly non-black women. At one point, an assistant football coach tried to entice black football recruits to Baylor by saying: “Do you like white women? Because we have a lot of them at Baylor and they LOVE football players.” As for booze, although intoxication is no excuse for the behavior depicted in this book, American colleges need to finally admit that the drinking culture that they tacitly support is rotting out higher education.

Despite these omissions, Violated is an exceptionally good book. The squeamish may find it hard to read, but Violated may be the honest portrayal of the seedy side of the college experience.