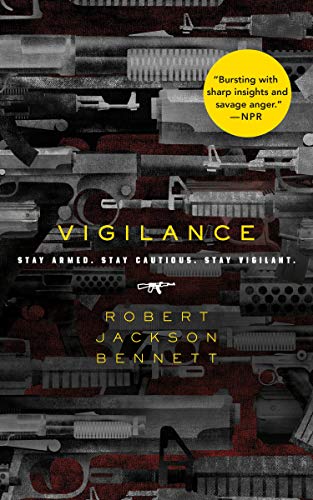 “readers on both sides of the gun ownership issue will heed the warning that giving in to petty tribalism and fear of those who are different will ultimately lead not to safety, but to destroying ourselves.”

Robert Jackson Bennett, best known for his fantasy novels Foundryside and the Divine Cities series, makes a significant departure from his usual style in this scathing satire of American gun violence. Bennett sets his sights not so much on the guns themselves as the culture surrounding them. He imagines an America in which frequent mass shootings and the fear of terrorism drives many to carry personal firearms, ready to defend their family and way of life against any danger.

Into this environment comes Vigilance, a reality TV show in which a real mass shooting is intentionally created by the studio and broadcast live to an eager audience of millions. Bennett makes this extreme premise seem almost plausible by connecting it to trends in our current society: our fascination with violence, our ability to distance ourselves from what we see on TV, and the ease with which we blame the victims of violence instead of the perpetrators.

Most of the book is told from the point of view of John McDean, the show-runner, who is intent on maximizing his viewership and advertising revenue. To accomplish this, he spends much of his time thinking about the demographic most likely to watch the show, reducing them to a simple set of defining characteristics. Through McDean, Bennett draws a caricature of those who see guns as necessary to personal and public safety, presenting them through a single lens of groundless fear, racism, and machismo.

In this, Bennett perhaps undermines his own purposes. One clear message of the book is that the “other” should not be feared and reduced to a faceless threat. In writing it, however, Bennett does the same to gun owners, depicting them as unthinking warmongers who will destroy our way of life. Few gun aficionados would see themselves in this description.

Vigilance is well written, with strong characterization and a compelling plot, making it as difficult for the reader to turn away from the book’s horror as it is for viewers of the show. It is primarily a political parable, following in the tradition of books like 1984, Animal Farm, and Brave New World to comment on the present by depicting an exaggerated future. As such, it is likely to be praised by those who agree with Bennett’s political perspective and reviled by those who don’t.

The tendency to violence and prejudice he describes is a very human one, however. In the best of possible outcomes, readers on both sides of the gun ownership issue will heed the warning that giving in to petty tribalism and fear of those who are different will ultimately lead not to safety, but to destroying ourselves.