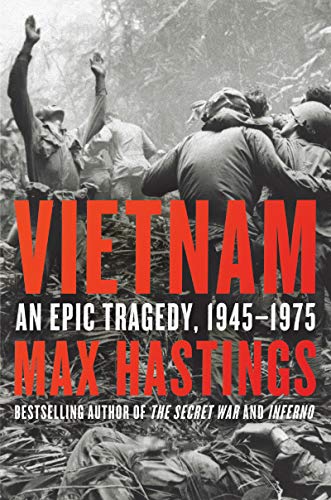 “Hastings has written the best one-volume history on this war in a generation . . .”

An award-winning author of multiple bestsellers on World War I and II history, Sir Max Hastings turns his attention to the 30-year war in Vietnam in this highly readable and candid new volume of what is still considered America’s most controversial war.

Combining his straight-forward writing style, no doubt developed by his war correspondent background, and his unbiased British perspective, Hastings offers a fresh outlook of these turbulent years, taking a distinctive viewpoint of highlighting the Vietnamese perspective of this era instead of the typical French or American history.

By using many previously overlooked or untapped Vietnamese archives and interviews, Hastings provides remarkable and largely unknown insight into the decision-making process of both North and South Vietnamese leaders, providing a view of the war many Americans have never considered.

The book covers a wide variety of topics during its chronological narrative, from the impact of domestic politics and his own insecurities on President Johnson’s decision to escalate the war in 1964 to the internal feuds and machinations of the Vietnamese Communist Party, to the controversy over the Army’s M-16 rifle.

With the benefit of hindsight, Hastings is also able to examine the conflict from a more complete Cold War perspective, exploring how the conflict fit into not just America’s Cold War portfolio, but the calculus of Red China and the Soviet Union in both their relationship with America and their own rivalry for dominance of the Communist bloc during this period.

This leads to some interesting episodes many previous histories have overlooked or given minimal coverage. First, the Soviets and Chinese gave a critical amount of material and manpower aid to the North Vietnamese war effort, often competing for Hanoi’s favor as their own rivalry for Communist-bloc dominance intensified through the 1960s.

Although the material aid is well documented, Hastings provides fascinating first-hand accounts from Chinese and Russian advisors, engineers, and technical experts who served throughout the north, oftentimes under air attack by American aircraft as they assisted in the repair of critical infrastructure and technical support to North Vietnams air defenses.

Second, even as late as 1964, there may have been a face-saving way for America to extricate itself from what was already becoming an open-ended conflict. The previously negotiated 1962 international treaty to “neutralize” Laos by nominally removing foreign troops and placing the country in a non-aligned status could have occurred in Vietnam, according to Hastings.

Whether the country could have become Asia’s version of Yugoslavia, Communist but nominally neutral from a Cold War perspective, can be debated, but as the historical record shows, Vietnam was not a natural ally of either Russia or China, and until America sided with the French efforts to reestablish colonial control, Ho Chi Minh expressed a desire for good relations with the United States.

But this opportunity as lost in the wake of the dual assassinations of President Kennedy and Ngo Dinh Diem in late 1963 and the war quickly escalated with the introduction of American air power and ground forces.

Third, Hastings offers some unique reporting into the political machinations of the North Vietnamese. Many Americans, steeped in the mythology of Ho Chi Minh and Nguyen Vo Giap as the masterminds of North Vietnam’s war plans will be surprised to learn that the real power in the Communist Party, at least after 1960 was wielded by Le Duan, the Party General Secretary. Moreover, throughout the war, the North Vietnamese were neither completely united behind the war effort nor in agreement on how to conduct the war, but as Hastings points out, because they were a totalitarian and insular state, they were able to conceal their in-fighting and blunders in a way the Americans and South Vietnamese could not.

Most American histories of the war taper off quickly after the Paris Peace Treaty of 1973 and the return of America’s prisoners of war. The final period of the war from 1973 to the final North Vietnamese offensive of 1975 is typically given short shrift even though, as Hastings details, the Communists were left in control of significant portions of the South and sporadic and often heavy combat continued throughout the South until the beginning of the final North Vietnamese offensive.

This final attack was the conventional attack with tanks, infantry, and artillery that the American military longed for during eight years of inconclusive combat. However, unlike the unsuccessful Easter Offensive of 1972, there was no chance of American airpower coming to the aid of the beleaguered South Vietnamese forces.

The final collapse of the South surprised few serious observers, between the collapse of American aid and the determination of the North to finish the war, the Paris Peace Accords were never more than an armistice that allowed the Americans to leave, the North Vietnamese to regroup and rearm, and the South Vietnamese to await their eventual fate.

Hastings has written the best one-volume history on this war in a generation, with an outside and unbiased viewpoint tempered by experience as both an award-winning military historian, first-hand observation of many of the events of the war, and long-time war correspondent. The book is comprehensive, incisive, and highly readable and if you only read one book on this controversial conflict, this volume is highly recommended.