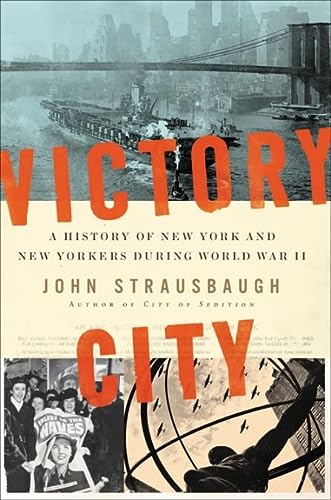 Once upon a time, as the saying goes, all roads led to Rome; in John Strausbaugh’s Victory City: A History of New York and New Yorkers during World War II, all roads lead to Gotham.

Victory City is grounded in the same thorough scholarly research and literary flair that marks his earlier study, The Village: 400 Years of Beats and Bohemians, Radicals and Rogues, a History of Greenwich Village (Ecco, 2013). His latest book is a comprehensive study of both the war effort and the critical role played by the city, city residents, and those who simply passed through during the tumultuous era.

The book is divided into two parts: The first half starts with the Great Depression and exhaustively chronicles the coming of the war; the second half details how the war played out in the city and its aftermath. More inviting, the book is organized into 52 bite-size chapters that are essentially chronologically organized with each focusing on a key feature of the compelling story.

Each chapter is presented as a snapshot of a specific issue, incident, or historical personality that played a role in the tumultuous era. Well-known figures like Franklin Roosevelt and Fiorello LaGuardia make regular appearance as do war-effort officials, popular entertainers, numerous spies, and innumerable obscure individuals who make cameo appearances. It is in these profiles of people long lost to history that the book makes its most original contribution.

However, the time frame for Victory City is unusually broad for a study, as the title states, of New York during WW II. All wars, let alone of major civil events, have roots that go deep in a nation’s life. But when did WW II begin?

Strausbaugh begins his story at the end of the Great War, WW I, and argues that the pre-WW II era began in 1933 when Franklin Roosevelt became president and Adolf Hitler Germany’s chancellor. The story builds to ’38 when Germany annexed Austria and Czechoslovakia; then continues to ’39 when Germany and the Soviet Union seized Poland, and England and France declared war; and come to the real starting point on December 7, 1941, when Japan bombed Pearl Harbor and the U.S. finally declared war.

The author tells his long “pre-war” setup to make clear that as war clouds gathered in Europe and Asia, the Roosevelt administration began to slowly prepare for what, for many, was inevitable. When war finally came, as he notes, “While Washington was the nation’s political capital, New York was the capital in just about every other way that mattered.” The author reminds readers that an estimated 1 million New Yorkers took war-related jobs, including many women.  He also details how the city served as the center of news and media affairs, the Brooklyn Navy Yard was an anchor military facility, and the Manhattan Project that conceived the atomic bomb was Manhattan based.

In the ‘40s, the nation was at war and New York welcomed freewheeling servicemen with money in their pockets and a yen in their pants. The author shows that Times Square was the locus of their attention, attracting an enormous number of single men, many just passing through on their way overseas to an uncertain fate. It was a general entertainment area in which mingled servicemen, visitors, young people on dates, gamblers, con men, street preachers, taxi dancers, barflies, hookers, panhandlers, grindhouse movie-goers, and whoever.

Buried deep in Victory City are some remarkable revelations as to the role some major banks, oil companies, and other corporations played during the war. For example, Strausbaugh critically examines the role of the Rockefeller family holdings and points out “Chase’s [National Bank] collaboration with Nazi Germany looks rather insignificant when compared to those of the Rockefellers’ largest business, the wellspring of their vast family wealth, Standard Oil.” He details its relations with the Germany chemical firm, I. G. Farben, “the industrial foundation on which Hitler built his war machine.”

The author reminds readers that pro-Naxi sentiments were popular in the city in the decades leading up the Pearl Harbor. On Memorial Day 1927, New York faced a series of riots by reactionary groups that challenged the meaning of nation’s core beliefs in “equality”; the nation has fought a bloody civil war over how equal is equal. On that day, in the Bronx, sympathizers of Mussolini and the Italian fascist movement along with supporters of Ku Klux Klan rioted held a rally; at a

Klu Klux Klan rally in Queens, the author notes, “a handful of men were arrested in scuffles with the cops; one of them was the 21-year-old Fred Trump from the Bronx, Donald’s future father.”

In 1949, E. B. White famously wrote, “New York is not a state capital or a national capital, but it is by way of becoming the capital of the world.” While London, Paris, Berlin and Tokyo recovered from a devastating war, the Big Apple was all-powerful. In 1950, the city’s population topped 7.5 million people; Washington, D.C., was about one-tenth its size, with 800,000 residents.

The city was the center of global capitalism. It was home to 135 of the nation's largest industrial companies, including General Electric, Standard Oil, Union Carbide, and U.S. Steel. The city had the world's biggest port, accounting for more than 40 percent of the nation's shipping. It was the world’s leading manufacturing hub, with 40,000 factories and over a million factory workers. It was also the nation's largest wholesaling center, accounting for a fifth of all U.S. wholesale transactions. New York was the media capital, home to the leading newspapers, magazines, book publishers, record companies, TV networks, and ad agencies.  Wall Street was the world’s financial center.

The end of WW II brought more than peace to New York and the nation. In the decade following the war, the U.S. was remade. It was transformed from an agricultural to an industrial economy; from a local to a continental territory; from a rural to an urban and, increasingly, a suburban nation; from a white to a mixed-race society; and from a nation state to a global power. And so, too, the nation’s sexual and political culture were transformed. The Big Apple was the epicenter of this transformation.