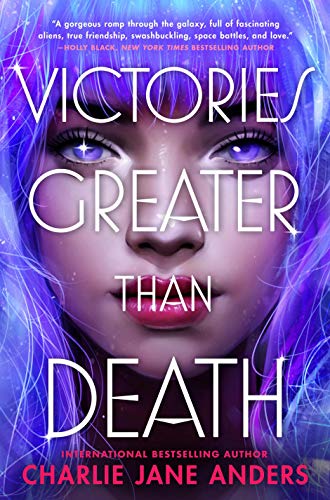 “Anders’ storytelling is fleet-footed and clever, bursting with fun quips . . .”

Take a mash-up of Star Trek, Star Wars, and Galaxy Quest, throw in a splash of teen romance, and you’ve got the essence of Victories Greater than Death, a YA space opera with a heart.

High-schooler Tina Mains has always known she’s destined for greater things. Unable to conceive, her mom had eagerly accepted a baby alien, even knowing that when Tina’s rescue beacon activated, her daughter would join the Royal Fleet to save the galaxy. Disguised as a human, Tina undergoes a typical Earth girl life, while longing for the stars.

Turns out Tina is a clone of the deceased Captain Argentian, one of the greatest warriors the galaxy has known. When Tina’s rescue beacon goes off in a public parking lot, evil Compassion soldiers track her down. Tina and her best friend Rachael barely escape with their lives and are beamed up to the Royal Fleet spaceship orbiting the Earth.

Unfortunately, the captain’s old ship is in bad shape, and the Royal Fleet’s war against The Compassion, a genocidal fringe group, isn’t going well. When the memory restoration process doesn’t fully work on Tina, she must join the fight not as an experienced captain, but as herself—a teen girl with raging hormones and loads of self-doubt. Her friend Rachael, a gifted artist, comes along for the adventure, and suggests they send a “hero request” to some brilliant teens from Earth to help the Royal Fleet. Four truly diverse teens answer the call.

Of course, any time you get six teens in one place, romance can’t be far behind. Tina and the other team members wrestle with their attractions while trying to beat The Compassion to a mysterious artifact that will bestow ultimate power—all while keeping their ship from being blown up.

Anders’ storytelling is fleet-footed and clever, bursting with fun quips like: “I need to eat. Failing to live up to my destiny gives me a powerful appetite.” There’s an admirable, inclusive diversity in gender identification (even among aliens), leading characters to introduce themselves with lines like, “My name is Bildub, and my pronoun is wey.” Even the bad guys get in on the act:

“My name is Captain Teyeyeyey, and my pronoun is she, and I am going to slaughter you. You have ten microcycles to surrender.”

The action comes fast and furious as their ship, The Indomitable, races across the galaxy from one hairbreadth escape to the next. Along the way, Tina learns to trust herself, surrender to love, and perhaps most important of all: that a captain’s greatest skill isn’t leading, but listening to her team. Recommended for all sci-fi loving readers.