Victoria: The Heart and Mind of a Young Queen: Official Companion to the Masterpiece Presentation on PBS 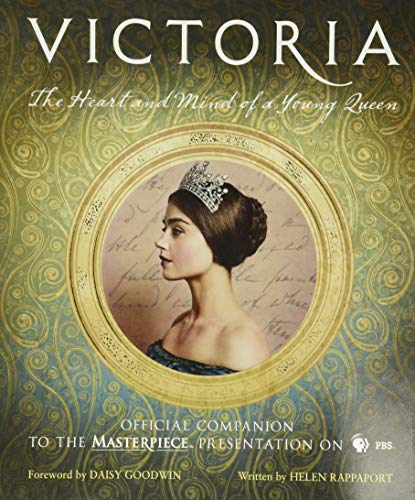 “a marvelous companion to this series, with wonderful illustrations and an engaging backstory . . .”

The PBS network excels at British period dramas and has recently begun the most intriguing story of them all, a dramatization of the life of Queen Victoria. Victoria, Britain’s “Maiden Queen,” assumed the throne in 1837 at the age of 18 and was, until the reign of her great-great granddaughter, Queen Elizabeth II, the longest reigning monarch in British history.

Her story is one that Jane Austen would truly appreciate: a tale of romance, intrigue, and a strong willed young woman who defied expectations to reign over the British Empire at the height of its power and influence.

This companion volume, lavishly illustrated and wonderfully written, is a combination of character guide, history, and behind the scenes look at how this complicated drama, now in its first season in the United States, was written and produced.

The volume provides not only a character guide and introduction to the actors portraying each figure; it provides a short biography of each person and their relationship with Queen Victoria. For the royal watcher or fan of Victorian England, it provides a fascinating glimpse at the complex relationships of the royal court and courtiers, as well as the palace intrigue of the time, often casting a less than flattering look at English royalty, especially the immediate family of young Victoria, where both her uncle and mother conspired behind the scenes to control the throne.

The history is well written and engaging, using excerpts from letters and diaries written by Victoria to show how this young queen was very aware of her weighty responsibilities even as she yearned for someone to love her. The story of her romance with Prince Albert is one of the highlights of the book, showing the side of Victoria not often shown to her subjects, of a happily married woman who enjoyed a passionate relationship with her husband and, while enduring the often difficult challenges of pregnancy and childbirth in the 1800s, bore a large family that was married off to some of the most prominent royal houses of Europe.

The family tree provided in the book is particularly interesting. What many viewers and readers may not realize is that, because of the intermarriage of many of the royal houses of Europe, which included several of Victoria’s daughters, the reigning King of England, Kaiser of Germany and Czar of Russia were actually all cousins in 1914, making the First World War even more tragic as it destroyed two of the oldest royal houses in Europe.

For lovers of PBS dramas, royal watchers, and fans of the Victorian Era, this book is a marvelous companion to this series, with wonderful illustrations and an engaging backstory showing the detail that went into the making of the series and providing just enough history to highlight the story of this fascinating monarch that truly defined one of the greatest eras in British history.