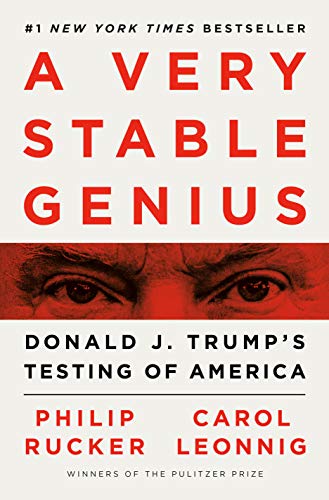 “When you’re president, you can do anything.” This slogan, adapted by David Leonhardt (New York Times, February 3, 2020) from Trump’s claim about getting his way with women thanks to his TV stardom, aptly summarizes the outlook of the man deconstructed in A Very Stable Genius. The book provides an authoritative, blow-by-blow account of  Donald Trump’s first three years in the White House.

A Very Stable Genius is based on reporting by the authors and that published in other major media outlets and enriched documents and  by hundreds of interviews with persons who should know. The authors, Philip Rucker and Carol Leonnig, have covered the Trump presidency and belonged to a team of Washington Post reporters that won a Pulitzer Prize in 2017 for analysis of  Russia’s interference in the 2016 election.

The book ranges from the 2016 election and 2017 inauguration to the early days of the impeachment proceedings  in 2019–2020. Most of the events described will be familiar to readers of the Washington Post, New York Times, and other major news sources.  But the reporting by Rucker and Leonnig illuminate the petty and often vindictive quality of the president’s thinking. Here are some examples:

• When the president fired James Comey as FBI director, Trump summoned the White House photographer to record for posterity his signing the termination letter.

• When he learned that Robert Mueller had been appointed to investigate him and his campaign, Trump exploded at Attorney General Jeff Sessions: “It’s your fucking fault. You ‘re weak. This is all your fault.”

• Meeting at the Pentagon with Defense Secretary James Mattis and a room full of senior military commanders, the notorious draft dodger called them a “bunch of dopes and babies” and paid them a near ultimate insult: “I wouldn’t go to war with you people.”

In many instances the authors give rich detail on events covered more broadly in the news. For example, after talking with UN Ambassador Nikki Haley and National Security Assistant H. R. McMaster (each of them a rival to the Secretary of State), Trump decided at last to fire Rex Tillerson. Trump had his chief of staff John Kelly break the news to Tillerson via a phone call to Kenya, where Tillerson was sleeping at  2:00 a.m. on a Saturday morning. The secretary was visiting five African states trying to undo the damage caused when the president called them “shit-hole countries.”

He and some of his staff had fallen ill due to some food-borne illness but were expected to recover in a day or two. Tillerson objected to Kelly that he was booked for three days of meetings but agreed to return one day early. Nonetheless  Kelly phoned again at 2:00 a.m. on Sunday morning and said Tillerson needed to return by Monday morning. Kelly explained that the president wanted to fire his top cabinet officer by tweet and that he, Kelly, was treading water till this act could be done in some other fashion.

Tillerson said that his recall would signal the world about a breakdown in the U.S. government. Still, he flew back to Washington at 4:00 a.m. on Monday and went home to sleep for a few hours. At 8:44 a.m. the president tweeted that Mike Pompeo would be the new Secretary of State and that Gina Haspel would succeed Pompeo as Director of the CIA. The tweet predicted that Pompeo “will do a fantastic job! Thank you to Rex Tillerson for his service!” Trump praised Haspel for being the first woman to head the CIA. “Congratulations to all!” the tweet ended.

The Undersecretary of State for Public Diplomacy, Steve Goldstein, on Skype with U.S. employees in Africa, had to break that connection and address the world  when he learned of the morning tweet. He passed on to the department a message from Tillerson ending with the assurance “that public service is a noble calling and not to be regretted.”

A short time later, an agent of the White House personnel office arrived and informed Goldstein that “the President has relieved you of your duties.” Soon the president phoned Tillerson from Air Force One en route to fund-raising in California. He spoke as if they were old friends catching up. Trump never explained why Tillerson was fired except to say they were of a different mindset. Some of Trump’s top aides, meanwhile, trashed Tillerson to reporters.

Chief of Staff Kelly, after all this, felt defeated. He had struggled to protect Tillerson’s job and feared the result of Trump’s grinding through another of his guardrails. “The forces of darkness have won today,” he told some aides. Whatever Trump said to Tillerson, the latter replied “Yes, sir.”

Such incidents took place regularly during Trump’s first three years. By 2019 he was feeling invincible—that he could exert  the vast powers of his office in pursuit of his personal and political goals without accountability. When challenged, he cast himself as the victim of a conspiracy. As Rucker and Leonnig say, this has been the way of other authoritarian leaders—creating a cult of victimization to hold onto power and justify their aggressive agendas.

Rucker and Leonnig end by quoting the Brookings Institution researcher William A. Galtson: The president “appears to be daring the rest of the political system to stop him—and if it doesn’t, he will go further. . . . The Constitution is not a mechanism that runs by itself. Ultimately we are a government of men and not law. The law has no force without people who are willing to enforce it.” As of February 2020, the U.S. Senate lacked a majority willing to do so. This book helps to explain how this happened.

The Electoral College in 2016 did not choose a very stable genius to be the president in 2016 but an egotist whom Tillerson termed a “moron”—someone quite self-confident in his ignorance and pride.