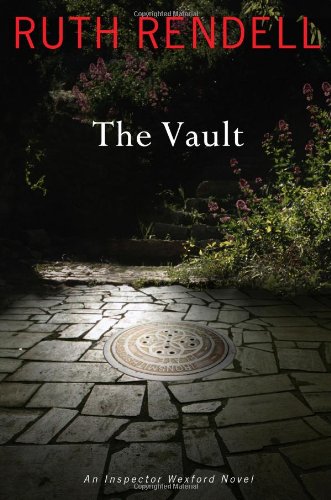 “Electrifying and compelling from start to finish, The Vault is an absorbing and skilful exploration of evil told with the distinctive and par excellence voice of author Rendell at her literate and psychological best.”

“I’ve often wondered what’s under that lid thing but never bothered to have a look.” Those are the 15 mundane words spoken by Martin Rokeby to wife Anne that will change their tidy lives chillingly forever. The ‘lid thing”—a manhole cover—shrouds the secrets hidden beneath, leading to the vault, and soon turns out to be a Pandora’s box for the Rokebys. . . .

The Monster in the Box, by Ruth Rendell, released in October 2009, was widely rumored to be Chief Inspector Reg Wexford’s last case. This turned out to be incorrect; however, it was the final novel featuring Wexford as an employed policeman. In The Vault, he has retired—or would be—if murder and danger would only leave him alone. He and wife Dora, now divide their time between Kingsmarkham and a coach house in Hampstead, belonging to their actress daughter, Sheila.

Wexford takes great pleasure in reading books, but, for all the benefits of a more relaxed lifestyle, he misses being the law. But a chance meeting in a London street, with someone he had known briefly as a very young police constable, changes everything. Tom Ede is now a Detective Superintendent, and is very keen to recruit Wexford as an adviser on a difficult case.

The bodies of two women and a man have been discovered in the old coalhole of an attractive house in St John’s Wood. None carries identification. But the man’s jacket pockets contain a string of pearls, a diamond and a sapphire necklace as well as other gems valued in the region of £40,000.

It is not a hard decision for Wexford. He is intrigued and excited by the challenge, and, in the early stages, not really anticipating that this new investigative role will bring him into extreme physical danger.

In The Vault, Wexford takes up a case that took place in an earlier stand-alone novel, the critically acclaimed A Sight for Sore Eyes. At the end of A Sight for Sore Eyes there were three bodies—one living, two dead—entombed in an unused underground vault beneath a picturesque London house.

Now, more than a decade later, a gruesome discovery is made when the new owner pulls back a manhole cover in the yard. In addition to the three bodies, there is a fourth, placed there not longer than two or three years ago. The conundrum? How the hell did someone else end up in that grisly, dark and godforsaken place? And who knew of its existence and its terrible secret?

Electrifying and compelling from start to finish, The Vault is an absorbing and skilful exploration of evil told with the distinctive and par excellence voice of author Rendell at her literate and psychological best. The assemblage of diverse characters, twists and crafty unforeseen turns, imbues the intelligent story with a page-turning compulsion, making this a must-read crime novel for 2011, and in line for another Dagger or Edgar.