The Vanished (A Konrad Simonsen Thriller) 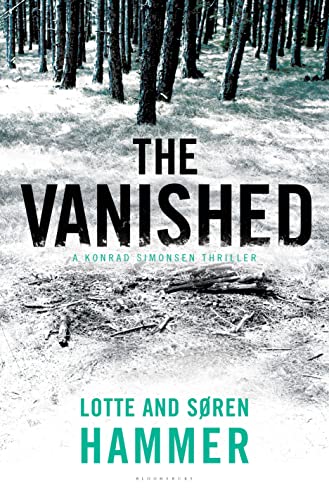 In 2004, Søren Hammer arrived at the house in Frederiksvaerk, Denmark, where his younger sister Lotte lived with her husband and children. A divorced teacher trained in computer programming, he moved into the upstairs apartment while Lotte, a trained nurse, continued to work as the manager of a nearby public eldercare facility.

Søren soon approached Lotte with a proposal. Would she help him write a crime novel? The suggestion was not too farfetched as they’d both previously dabbled with writing, although never for publication.

Lotte agreed, and their manuscript began as a fun project, just to see if they could do it. After it was finished and revised multiple times, it was eventually accepted by Gyldendal Publishing in Copenhagen and published as Svinehunde (The Hanging). When Gyldendal took a 60-page excerpt to the 2010 Frankfurt Book Fair, they sold it to several countries before it had even reached Danish bookshelves. The Lotte and Søren Hammer phenomenon was born.

The Vanished is the third novel in the series featuring Konrad Simonsen, head of the Homicide Division of the Copenhagen Police Department. It follows The Hanging (2013) and The Girl in the Ice (2015). The siblings have also written three more novels in the series to date.

In The Vanished, Simonsen returns to work after a severe heart attack and is handed what appears to be a very simple assignment. A postman has been found dead at the bottom of his apartment stairs after an apparent fall. Although the file needs only a quick desk review before being signed off and archived for posterity, Simonsen is disturbed when he discovers life-sized images of a teenaged girl on the walls of the dead man's attic. Who is she? Why did the victim maintain this shrine dedicated to her? Is she connected somehow to his death?

As the case grows in scope and complexity, key members of Simonsen's investigative team return in this novel to assist him, including The Countess, a.k.a. Nathalie von Rosen, his life-partner; Pauline Berg, the youngest member of the team, who is struggling with the aftereffects of a vicious kidnapping; and Arne Pedersen, who has been acting as head of Homicide in Simonsen's absence.

The story moves down several blind alleys as the investigation progresses, as one would expect in a police procedural, but coupled with the interruptions of the developing recollection of his relationship with Rita, the pace soon becomes slow and irregular.

Obvious allusions abound to the 1967 Beatles album Sgt. Pepper’s Lonely Hearts Club Band, including the original title of the novel (The Lonely Hearts Club), the missing girl Lucy (in the sky with diamonds), and Simonsen’s lost girlfriend Rita (seen near the end of the novel as an actual meter maid). Although Beatles fans may enjoy the tribute, the allusions come off as somewhat strained and contrived, and they undercut the sense of verisimilitude one looks for in a police procedural.

Other sources of irritation include a disjointed narrative technique that plays coy with the reader when key information is coming to light, and a problematic translation into English from the original Danish. While the Ebba Segerberg translation of The Hanging was generally smooth and unobtrusive, Martin Aitken based his translation of The Vanished rather heavily in British colloquialisms and slang, which occasionally leaves North American readers confused about what’s being said and wondering if the Hammers have dramatically changed their writing style over the course of the series.

Despite these shortcomings, fans of the subgenre will find Konrad Simonsen engaging enough to finish the novel and look forward to the next one. Like Sjöwall and Wallöö’s Martin Beck (an acknowledged influence) and Henning Mankell’s Kurt Wallander, Simonsen is a typical Scandinavian noir protagonist, brooding and filled with self-doubt. While his supporting cast is at times flat and inconsistently drawn, Simonsen will keep his faithful readership turning the pages and looking for more.