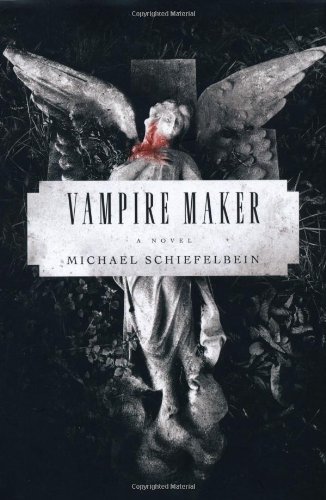 Unconvincing and disappointing are two adjectives that come to mind when describing Michael Schiefelbein’s latest novel Vampire Maker. While all of the ingredients seem to be there, from Catholic dogma to ancient Roman history to dark moody eroticism, Vampire Maker comes off as sort of Mills & Boon romance with vampires. There is a long and proud history of vampirism in literature; Bram Stoker’s Dracula, Stephen King’s Salem’s Lot, Anne Rice’s Le Stat series, even Stephenie Meyer’s Twilight novels, which seem designed purely for teenage girls—all have merit in the genre. However Vampire Maker offers little that is new and is the poorer for it.

Michael Schiefelbein spent ten years studying for the priesthood, graduated from the University of Maryland with a doctorate in English, and has written six novels. He was nominated for Lambda Literary Awards for his novels Vampire Vow (2001) and Vampire Thrall (2003). Vampire Maker is the fourth novel in his Vampire series. Schiefelbein was a professor of writing and literature in Memphis, Tennessee, and now lives in Modesto, California. Vampire Maker is based around three main characters: Charles, the young priest who is trying to find a religious “cure” for his sexual orientation; Kyle, the attractive former priest to whom Charles finds himself irresistibly drawn; and Vincent, the 2000-year-old vampire who has Kyle in his thrall and power on his mind. Charles and Vincent are engaged in a tug-of-war over the affections of Kyle, who in turn has some big choices to make. The action takes place in a hurricane-ravaged New Orleans, a setting that works well for this genre. There are some nice descriptions of flood damage and urban destruction, as well as of cemeteries and mausoleums. New Orleans is known for its supernatural influences, and as such works well as a location for even this disappointing vampire tale. It must be noted that Schiefelbein has an interesting and well thought out concept of planes of existence. He conceives of a “Kingdom of Darkness,” which is the proper plane of existence for vampires, and exists separately from ours and also separately from those of heaven or hell. This allows for some neat interactions and shifts between characters and motives. However, this cleverness does not make up for the over-blown language and over-familiar tropes that abound in this novel. While it could be said that vampirism is gothic and moody at the best of times, this novel is clichéd to the point of predictability. It is one thing to adhere to familiar themes and subjects, but it is also important to display some originality in one’s story telling. Unfortunately, there is precious little originality here. Perhaps the most gratifying aspect of this novel is its rejection of the idea that homosexuality is unnatural, or a disease for which there is a cure. Schiefelbein has the character Charles question his sexual preferences throughout the work. Charles begins by acknowledging his homosexuality before coming to believe that he has been “cured” by divine intervention. Throughout the novel the author challenges the idea that being gay is anything other than acceptable and natural. The best use of the traditional vampire trope is in Vincent’s extreme confidence about his sexuality. In this respect he is an example for both Charles and Kyle. Perhaps this is the appeal of the vampire in literature, particularly gay literature. The vampire is the other, not the same as the rest of society, and biologically unable to ever be the same. Yet, despite their difference, the vampire is traditionally proud and confident, aloof even. This, surely, is a fine example for the gay and lesbian community, and is a motif that stands out in an otherwise disappointing read