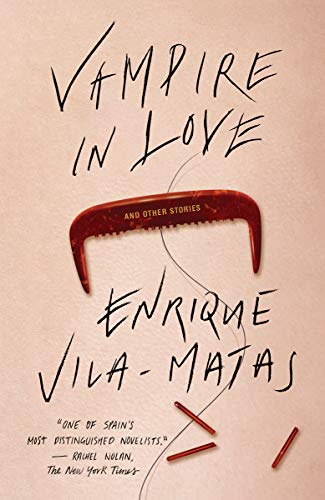 “I had a friend once. Indeed, at the time, I only had one friend. His names was Andrés and he lived in Paris and, much to my his delight, I travelled to that city to see him. The very evening of my arrival, he introduced me to Marguerite Duras, who was a friend of his. Unfortunately, that evening, I had taken two or three amphetamines.” So begins “Sea Swell,” a short story collected in Vampire in Love, by Enrique Vila-Matas. Published by New Directions, this short story collection brings together the macabre and the comic from a visionary Spanish storyteller.

Ably translated by Margaret Jull Costa, the stories run the gamut from the fantastical to the experimental. Ms. Jull Costa’s translations have included other Spanish and Portuguese authors including José Saramago, Eça de Queirós, and Javier Marías. Enrique Vila-Matas has had a couple other works translated into English, including some with Anglophonic titles like Bartelby & Co. and Dublinesque. The stories included in this collection date as far back as 1974.

“Sea Swell,” is the story of two young men who have dinner with the famous French author Marguerite Duras. Through happy accident, the two men discover Ms. Duras has a vacant apartment. During their dinner events soon begin to unravel. Mr. Vila-Matas uses a bit of indirection by having the disastrous meal narrated by a jet-lagged, speed-addled, financially bankrupt narrator. The assumption being the drugs and the jet lag would led to any number of awkward faux pas. He then witnesses his friend spin the tale of the lost continent of Atlantis. As his friend continues his explanation, the narrator realizes his friend is losing touch with reality. His friend broadcasts his insanity to Marguerite Duras.

Other stories reveal strange twists and turns. One story has sentient mosquito netting while another, the titular “Vampire in Love,” is a farcical parody of Vladimir Nabokov’s Lolita. The so-called vampire in the tale is an ugly effeminate barber with dental deformities. He harbors a passionate love for “the boy with the unsurpassable, Murilloesque face, the marvellous, unattainable boy who wants nothing whatever to do with him.” The barber’s desires remain unconsummated, pathetic, and comical all at the same time.

Vila-Matas, when not penning domestic comedies or fantasies, writes experimental pieces. “I’m Not Going to Read Any More E-mails” exemplifies a story with more formalist inventiveness. A short introductory section establishes the narrator is a writer holed up in a hotel in Sardinia. Taking his cue from Erik Satie, he responds to his emails without reading them. The story becomes a long list of random responses. “To e-mail no. 14 (a young writer) I said I never read anything for fear of reading something good.” Another response is revealing, “To e-mail no. 11 I said that among my favorite authors are David Markson and Flann O’Brien, as well as Markson and O’Brien’s favorite authors, and all the favorite authors of their favorite authors.” At only four pages, it stands in contrast to his longer pieces like the novella-length “The Boy on the Swing.”

These stories range in style from the realistic to the fantastic, embracing traditional genre tropes or metafictional experimentation. Enrique Vila-Matas spins darkly comical yarns like a Spanish Tim Burton or a literary Pedro Almodóvar. Vampire in Love represents another innovative voice in Spanish language literature. With this collection, Vila-Matas can join the likes of Roberto Bolaño, Severo Sarduy, and Carlos Fuentes.