In the Valley of the Devil: An Earl Marcus Mystery 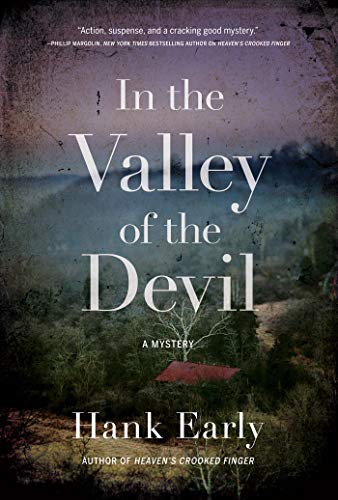 “will appeal to anyone who likes the hardboiled Southern private eye novel where evil lurks beneath the surface of a quiet little town.”

Earl Marcus has earned some dubious fame for himself in his north Georgia hometown in Coulee County. Recently, he brought down the cult church run by his father, whose tenets were that all are equal as long as they’re male, white, and American. He’s also made an enemy of the surviving bigots in town because he has a girlfriend who’s not only an Atlanta cop but she’s African American.

What else can go wrong?

It all starts when Ronnie Thrash shows up, asking for a favor. Earl’s in a bind because he’d like to refuse but he can’t, because Ronnie knows where the bodies are buried. Literally. He helped Earl hide his father’s corpse after Earl burned down his daddy’s church.

Now Ronnie wants Earl to go with him while he collects some money owed him from boss, to be his insurance in case there’s a problem. Reluctantly, Earl goes along but things don’t turn out as they should, especially when Ronnie draws a gun and Earl drags him away because there are two small children in the house.

Later, on a walk in the mountains with girlfriend Mary, they find a cave and a skull. The sheriff says it’s a fake, something left over from Halloween but there’s writing on the wall, signed “Old Nathanial.”

Who’s Old Nathanial? An amalgam of a serial killer who lived in the mountains at the turn of the century combined with the local legend of a man who killed black folks with a big knife when the moon is full—and kept their skulls as souvenirs.

Earl’s never heard of him though Mary and most of their friends have. Some swear they’ve actually seen him.

Like a bad penny, Ronnie shows up again claiming Lane Jefferson is growing pot in his cornfield. He wants Earl and Mary to take photos and turn Lane in to the local sheriff. Reminded again by Ronnie how he “owes him,” Earl agrees, against his better judgment.

This episode turns out worse than the last. Ronnie isn’t there when they arrive and as they search the cornfield, Mary disappears. Earl discovers the man who abducted her unconscious; when he revives, he swears Old Nathanial took her.

“I plunged into the corn, trying to find a path but there was something dizzying about the silence greeting me. I broke it, calling Mary’s name. My voice fell flat, a dead bird crashing into a wall of stalks. I aimed my flashlight but its glow was swallowed alive by the layers of dark. My hands touched corn silk like spider webs, woven by the relentless September wind. The moon was a thick thumbnail in the pearl black sky.

Mary was gone. The knowledge of it opened up something inside me, like a lightning storm in the pit of my stomach.”

Now Earl’s in a race against time, for if Old Nathanial is real and he kills by the full moon, he has only a few days to find Mary. Add a has-been movie director to the mix, one now in the business of making snuff films, and a charismatic preacher who wants to pick up where Earl’s father left off, and nothing good’s going to come of any of this.

Earl find himself relying on Ronnie more than he’d like while over everything hangs a recurrent nightmare that always ends the same way . . . Mary lives but Earl dies.

Some of the dialogue spoken by the more bigoted characters in this novel will undoubtedly raise the hackles of the reader, while the legend of Old Nathanial will give chills all around, especially if that particular reader is a native-born Georgian aware of local urban (and farm country) superstitions.

On the other hand, Earl is basically a good man who did a bad thing that did a lot of good, yet he’s still living with the horror of his crime as well as the trauma of a childhood under a tyrant’s fist. Who says being an adult makes you outgrow childish fears? Though Mary doesn’t appear so much in this novel, when she is there, she’s more fearless than Earl, at least in his opinion. The one character to watch, however, is Ronnie . . . a weasel, a schemer, and a coward, he nevertheless in the end proves himself one of Earl’s staunchest allies and his reward is the most ironic and unfair event in the story.

Along with creating a storyline that will make the heart pump faster with its intensity, some of the descriptions will linger in the memory for their almost lyrical and poetic quality.

In the Valley of the Devil will appeal to anyone who likes the hardboiled Southern private eye novel where evil lurks beneath the surface of a quiet little town. As in the stories of James Lee Burke, Hank Early has captured the flavor and gist of the contemporary South and his Coulee County residents will give David Robichaux’s Lousianans a run for their money any day.