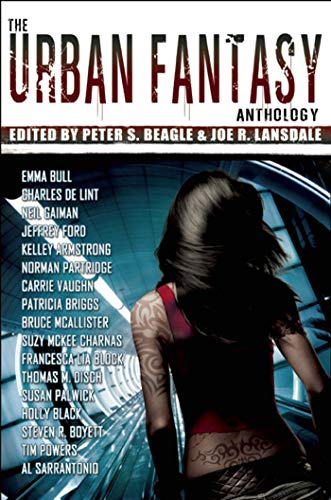 “These are the stories that most stretch the imagination and the credibility of the readers, and they’re all successful. . . . a reminder that there’s more to Urban Fantasy than the vast numbers of women on motorcycles who kill bad things.”

Urban fantasy, as a genre, is a tricky thing to pin down, and The Urban Fantasy Anthology handles this fact in the best way possible: by not trying. Instead, editors Peter S. Beagle and Joe R. Lansdale divide the book into three parts to show all the variation in story that falls under the umbrella of UF.

Starting with Mythic Fiction, going through Paranormal Romance, and ending in Noir Fantasy, this single volume manages to cover a lot of ground. In a little over 400 pages, the editors present 20 stories that all have the basics of the genre in common—an urbanized setting, an emphasis on the fantastic elements juxtaposed with the normal world we all experience on a daily basis—but are all, nevertheless, very different stories. Between the segments, the editors offer discussions of the genre as a whole and the specific flavor of it that’s to be explored by the following segment, all three of which are informative, in-depth, and thoughtful, written by some of those involved in the creation of the genre.

Part One, Mythic Fiction, is probably the least like what the common reader might consider Urban Fantasy based on the novels with covers like the one the Anthology has. There’s no tattooed women fighting werewolves or loving vampires here, but these are some of the best stories in the book because of the fact that they aren’t pigeonholed by that definition. These stories deal with mythic things in a modern context: Emma Bull’s elves, something sort of Native American from Charles de Lint, Neil Gaiman’s modern yet forgotten gods, Jesus and the Devil on a really weird Hunter S Thompson-esque road trip from Jeffery Ford and an artist’s unicorn from Peter S Beagle, who has built a career on touching and charming stories about unicorns in all contexts.

These are all strange, sweet, stories that bring to mind something bigger than the reader might usually see the world, and all have a sort of common sadness about them. Something went wrong in each one, and the mythic world is trying to fix it, even if it doesn’t realize that’s what’s happening.

The middle section of the book, Part Two’s Paranormal Romance, is the most like what the cover indicates, and is perfectly placed between the Mythic and the Noir, because it is exactly the overlap of the two. Harder and grittier than the dreamy Mythic stories, not as dark or bleak as the Noir ones. Here, we find a fairy court royal who just wants a normal life and how it doesn’t work out from Charles de Lint, Kelley Armstrong’s story of a woman obsessed with haunted houses, a teen out for revenge with his witch girlfriend by Norman Partridge, a distinctly urban sort of zombie from Carrie Vaughn, Patricia Briggs’s story of a werewolf and his witch, a hitman hired by an angel by Bruce McAllister, a girl who turns wolf and deals with puberty that way by Suzie McKee Charnas, and a distinctly feminine take on the paranormal PI from Francesca Lia Block.

The stories in this section tend to be more dire; the ‘romance’ in the title is less obvious, or else it is the old form of the word, which really meant ‘adventure’ when applied to books. People here do bad things with their fairytale powers and don’t always get the payback expected. The stories are emotional and personal, and show the real strengths of the writers included. The best of these, Charles de Lint’s “Companions to the Moon,” Patricia Briggs’s “Seeing Eye,” and Bruce McAllister’s “Hit” manage to do new things with old ideas, and to take just enough of the emphasis off the weird to make the stories affecting and realistic despite the weres and fairies and angels.

The third part of the book is the darkest yet: Noir Fantasy. These are also the strangest ones, but the most original and thought provoking, too. The name might bring to mind old-fashioned gumshoes and murder mysteries, but here, it contains much more than that. Thomas M. Disch’s “The White Man” which is much more about cultural misappropriation and deep misunderstanding than it is about vampires, Susan Palwick’s “Gestella,” a werewolf story from the wolf’s point of view;Holly Black’s “The Coldest Girl In Coldtown,” about what it’s like living in a vampire-infested world when you’re infected but not turned; Steven R Boyett’s bizarre post-apocalyptic survival slice-of-life “Talking Back To The Moon;” Joe R. Lansdale’s “On The Far Side of the Cadillac Desert With Dead Folks,” ias much 70s exploitation film as it is post-apocalyptic western; Tim Powers’s “The Bible Repairman” in which a broken man tries to redeem himself to the ghost of his daughter;and Al Sarrantonio’s Poe-esque “Father Dear,” in which everything is not as it seems in the most horrible and satisfying way.

These are the stories that most stretch the imagination and the credibility of the readers, and they’re all successful. Coming after the Mythic and the PR stories, the reader’s take on fiction has been led to them enough that the need to jump off into the truly weird is easier to take, and the stories are strange, thoughtful, charming and horrible in turns. And they’re more experimental than the rest of the book: “Gestella” is a well-done second-person narrative;“Talking Back to the Moon” is a fantastic take on what happens after a non-technological end of the world; and “On The Far Side of the Cadillac Desert With Dead Folks” is just downright bizarre.

As the second of three Urban Fantasy anthologies out in the second half of 2011, The Urban Fantasy Anthology manages to show just how large and artful the genre is without narrowing it down to only one sort of story.

As the genre is presented here, we see a rich, full, experimental and long-lasting contribution to the ecology of Fantasy. It’s perfectly arranged and intentionally diverse, and there are no duds here like there are in some other anthologies. If you’re new to the genre, this is an ideal place to start, so you begin with the multitude of ideas that count here. If you’re a fan of the genre, this is like a re-acquaintance, a reminder that there’s more to Urban Fantasy than the vast numbers of women on motorcycles who kill bad things.