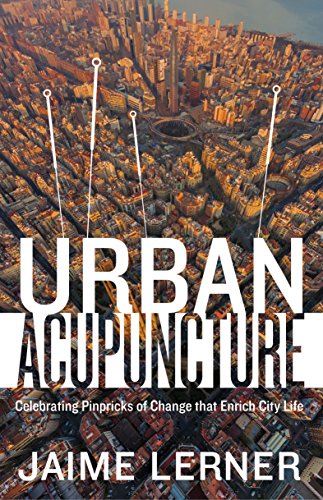 “. . . [readers] will come away from this read with their heads overflowing with ideas, inspired to do something themselves in the belief that a better world really is possible.”

We dream that one day all disease can be cured by the prick of a needle. Renowned urban planner and former Brazilian mayor and governor Jaime Lerner believes that “some of the magic of medicine can and should be applied to cities, for many of them are ailing and some are almost terminal.”

Lerner is convinced that healthier and more sustainable cities can be attained through “urban acupuncture.” The notion of restoring “the vital signs of an ailing  spot with a simple healing touch has everything to do with revitalizing not only that specific place but also the entire area around it.”

Pinprick interventions in the fabric of urban life can trigger improvements which set off positive chain reactions. A revitalized historic district, a garden in a quarry, a pocket park, a renovated monument, rapid transit, and public art can spark a current of new beginnings.

Like surgery, urban acupuncture needs to be precise and quick. And although the intervention may originate in the vision of one individual or group, it needs to be embraced by the majority to thrive. It must improve quality of life and foster community building. It has to be seen to work.

During his three terms as mayor of Curitiba, Lerner transformed his city into a global model of sustainable and livable urbanism. He learned through hands-on interventions that small scale, people-centered planning can be far more effective and enduring than expensive mega-projects.

In Curitiba, Lerner pioneered the Bus Rapid Transit system, a downtown pedestrian zone and a program that traded garbage for groceries and transit passes that quickly cleaned up the slums, plus a host of other innovative projects many of which are extant today, some 25 years later.

Lerner’s planning genius is anchored in simple, common sense solutions and this pragmatism is a large part of his popular appeal. For example, Curitiba’s rapid bus project hinged on the vehicles’ correct alignment at the station docks. Instead of purchasing an expensive guidance system, Lerner’s architect had a chat with a bus driver who showed how the vehicles could easily position using lines painted on the windows and platform.

In Urban Acupuncture, in addition to his own achievements in Brazil, Lerner shares his reflections about successful pinprick interventions he has observed in cities all over the world. He treats us to a hands-on celebration of relatively small changes which have had big results in terms of fostering the diversity, liveliness, social connectivity and sheer humanity of the traditional urban experience which modernity has been destroying.

Urban acupuncture does not have to involve bricks and mortar, but can stem from a new custom or habit. For example, Korean immigrants in New York City began to keep shops and delicatessens open around the clock, which enlivens whole neighborhoods and make for a safer city. Other cities are copying the night markets traditional in Asia.

“I often say that all those people who toil away at daybreak are urban orderlies, pumping oxygen into cities that must never be allowed to stop breathing. They are a city’s true lifeblood.”

In the same vein, Lerner suggests a way to reconcile the formal and informal economic sectors often at odds in a megacity. “Since the day has 24 hours . . . street vendors could start after hours—at say 6:00 P.M., their colorful mobile stalls livening up the city as the signs go dark on many conventional storefronts . . . One sector would help the other, because both would work in sequence, keeping the city alive with commerce day and night.” Acupuncture performed according to the ticking of the clock.

Another key to good urban acupuncture is the preservation or retrieval of the cultural identity of a neighborhood to recuperate our collective loss of memory of the markers which make a space a place.

An old movie theatre can be renovated to reclaim its former role as a cultural transmission node which glues a community together.

“A city’s memory is like an old family portrait. And just as we wouldn’t think of tearing up an old family picture—and the old movie theatre is part of this picture—we can’t afford to lose this point of reference, which is so vital to our own identity.”

On an infrastructural level, distinctive landscape features which define the soul of a city can be reclaimed from the concrete wastelands created by the car-fueled chaos of modernity. For example, the spaghetti tangle of downtown freeways can be removed to revive a bulldozed stream (Seoul, Korea) and encourage citizens to enjoy walking and promote lower “urban cholesterol.”

Lerner’s deep love for the city and the human potential teeming within shows most when he is describing the sights, sounds, smells, colors, pleasures, kindnesses and simple surprises we can stumble upon in a people friendly city. The relief of a shaded sidewalk, the unexpected intimacy of a secluded square, people-watching at an outdoor café, the aroma wafting from a bakery, musicians playing in a bandstand, the camaraderie of a local bar await our explorations.

In particular, there is “growing community awareness that urban kindness is essential to the livelihood of any city.” In Belo Horizonte, Brazil, residents take care of repairs after vandals damage a beloved sculpture in a city park. A housewife welcomes everyone to the nativity scene she sets up in her living room each year. Garbage collectors sing while they work. In Curitiba a dentist goes to the window and plays his trumpet after the last patient each day.

These are the kind of practices which testify to a healthy, happy urban community, where neighbors take pride in place and care for each other.

And there is musical acupuncture. “Every city has its own gesture, its own song. Some have a whole repertoire that immediately brings to mind the town’s particular features and landscape.” Think of Rio and you are likely to start humming “Cocacabana” or “Girl from Ipanema.” Rome, New York, San Francisco, and Paris have their own iconic songs. For dance, Brazil is samba and Argentina is tango.

Anything that promotes community self-esteem, identity, belonging and, above all, a determination to work together to make change happen is good acupuncture.

“What if each needle prick of acupuncture was a gesture of love for your city?” This is the message Lerner sends in this very personal manifesto, which is far from the conventional planning tome with discrete chapters on tidily organized topics.  Rather he spews out a stream of consciousness potpourri of notebooks, story vignettes, poetry, imaginings, and practical suggestions for making cities and citizens better.

The narrative is punctuated by delightful photos illustrating the immense variety of urban life and peoplescapes under constant threat from megalopolitan blight and galloping globalization.

Some readers might find the fragmented format distracting and the overwhelmingly positive spin of the selected examples lopsided. Surely there are disasters to balance the record? But others will come away from this read with their heads overflowing with ideas, inspired to do something themselves in the belief that a better world really is possible.