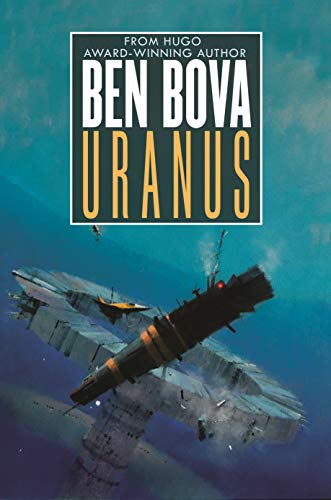 “the prose is tight and there is enough tension in the plot to draw in the reader despite any flaws.”

Most Ben Bova fans know that the books about space exploration in our solar system are going to be well written and intriguing. It’s a given considering Bova’s impressive resume and standing in the field of sci-fi and that the planets he’s written about contain either alien life or some near earth-shattering mystery. Uranus (pronounced You-ran-us) is no exception to this rule.

Raven Marchesi was a prostitute in Naples given a chance to become part of community aboard the habitat Haven, which circles Uranus, the brainchild of Reverend Kyle Umber and his friend, industrialist Evan Waxman. While Umber views the habitat as a refuge to rehabilitate recidivists and lift the downtrodden, Waxman sees it as a way to garner power and prestige.

Determined to climb the social ladder, Raven uses her considerable wiles and beauty to maneuver into Waxman’s bed, but shortly after finds that he is the creator and supplier of a new designer drug, Rust. Despite her conniving ways, Raven does have a heart and tries to distance herself from Waxman, which leads to disastrous consequences.

Added to this volatile mix is the arrival of Tomas Gomez, a brilliant Brazilian scientist who arrives on Haven to study Uranus and to find out why the planet, unlike the others in our system, is completely sterile. In a system where evidence of life has been uncovered on most of the planets, why is this one so barren? This particular question helps drive the story forward because it wouldn’t be a Bova book without some alien mystery for the intrepid humans to solve.

A touch of intrigue, some mayhem, and, of course, murder welded together with the aforementioned mystery is a core theme to any work by Bova, who brings such vivid characters and locations to life. Reading one of his books is like slipping on a trusty pair of sneakers, one isn’t surprised by the fit, but they feel too comfy to take off. The reader, if they’ve already gone through Bova’s Mars, Venus and Jupiter, pretty much knows what to expect, but the experience is still worthwhile.

Bova is certainly deft at weaving multiple storylines and inserting a host of interesting side characters (such as a corrupt news anchor from earth and the obligatory Scottish engineer) to round out his books. All interesting, all playing some deft role in the weave of the plot, but sometimes having too many characters threaded through the story distracts from the plotline, which is certainly true here as a couple of them seem like throwaways, Macguffins to advance the narrative. Too many, though, serve only to irritate the reader.

As per usual in a book written by Ben Bova, the prose is tight and there is enough tension in the plot to draw in the reader despite any flaws.