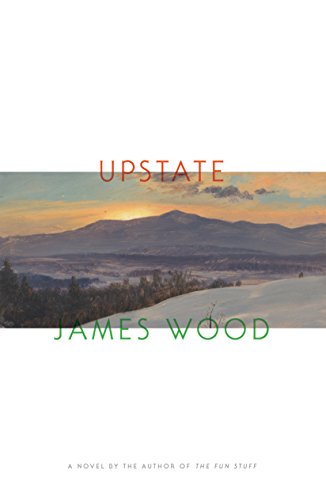 Upstate is a quiet, slightly boring, beautiful piece of writing, a bit like the image conveyed by its title, a rural retreat far from the lights and bustle of New York City. It is also, barely, a novel.

Alan Querry, a 68-year-old British property developer, travels with his younger daughter, Helen, to Saratoga Springs, New York (upstate from Manhattan, near Albany), to visit his always-moody elder daughter, Vanessa, because her boyfriend, Josh, emailed Helen that Vanessa had hurt her arm in an accident and seemed to “withdraw from life.”

In the deep winter of Saratoga Springs, and in author James Wood’s vividly original language, the Querries stumble in and out of a strained yet loving reunion and ponder the direction of their lives.

Helen considers quitting her job as an executive at Sony Music. Vanessa, a philosophy professor, worries that Josh will leave her. Alan probes his memories and mulls the meaning of happiness. Vaguely overhanging the visit are financial troubles at Alan’s business and a subdued sibling rivalry.

And that is pretty much all that happens, until a bump in the last 25 pages.

The pleasure in reading Upstate comes not from turning its pages, but from lingering on them, to savor the compelling descriptions. On Vanessa’s front porch, “two white rocking chairs, icily disabled, gestured at warmer seasons.” The snow “was coming down fast, in the passive-aggressive way of snow, stealthy but relentless, insisting on its own white agenda.”

Wood—an award-winning essayist and New Yorker book critic—deploys Alan as a modern-day British Tocqueville, comparing the foibles of the U.S. and U.K, with a mixture of envy, smugness, and annoyance.

His train trip from Manhattan to Saratoga Springs “had a pioneer feel—the enormous Hudson, with chunks of ice like broken pavement in the water; and the huge wealthy forests, the valley full of forts and power stations and opportunistic houses glooming on vast icy bluffs, the railway stations more like adventurers’ huts than anything in Europe—barely manned outposts without proper platforms, and outlandish names . . . Poughkeepsie, Yonkers, Schenectady.”

Of course it’s not fair to demand that Wood produce a faster-paced story, if that’s not what he wants to write. Still, Upstate is a bit of a cheat in the way it flicks at potential plotlines without actually doing anything with most of them (except for that last-minute bump): the implicit strains between Helen and Vanessa, the sisters’ resentment of their New Age stepmother, the hint of flirtation between Josh and Helen, the career uncertainties of all the Querries.

Typical of the Seinfeld quality of this novel is Alan’s “car accident” on a drive through the suburbs. “He pressed the brakes again, hard this time, in panic now.” And then, two sentences later, “He had enough time . . . to see that the oncoming lane was still empty of traffic, to be grateful for the seat belt, which had locked and was tightly bracing him. The Prius came to a stop at the far side of the road. The accident, such as it was, had taken a few seconds.” It’s not even a fender-bender, because nothing is bent. So why bother including this anecdote?

Happily, in his slow and gentle way, Wood finally leads his characters toward some new self-awareness and potential change, as a narrative must. The Querries and Josh are too well-meaning, intelligent and likable, after all, to have real car crashes.