Unwell Women: Misdiagnosis and Myth in a Man-Made World 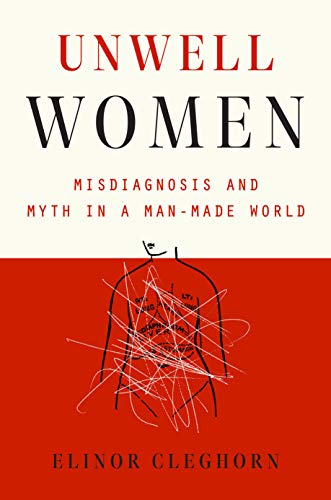 “. . . physicians once believed that women’s nerves were too highly strung for them to receive an education and that their ovaries would become inflamed if they read too much. But these outrageous myths are alive and well in a world where menstruation and menopause are still seen . . . as credible reasons why women shouldn’t hold positions of political power.”

Elinor Cleghorn’s new book, Unwell Women: Misdiagnosis and Myth in a Man-Made World, presents a history of how medicine, and physicians, have relegated women to a “subspecies told off for reproduction only.”

Through building-block chapters, Cleghorn traces the trajectory of how men used mythology and ignorance to create a system to “treat” women’s health problems. And it quickly becomes clear that “treatment” usually meant the woman should have another baby.

There is little doubt, after reading this book, that ancient views remain viable in the 21st century. Women’s body rights are under attack and, according to Cleghorn, “medicine has recently become a critical frontier for women fighting to have their voices heard and believed.”

It all started with the Greeks. A physician was called in by a concerned father. The doc had seen it all before. The young woman had too much extra blood in her womb and was drowning it. The treatment plan: Get her married because intercourse would “open her body so that her blood would flow out, and pregnancy would make her healthy.”

At the other end of the spectrum were menopausal women—they were being suffocated by their “empty and dry wombs.” Plus, the woman’s womb was climbing toward her liver and if unchecked she would choke to death. The cure? Regular sex.

The male-dominated medical community viewed women’s sole purpose as bearing and raising children. Doctors and society at large exercised control over women’s bodies and their reproductive capacities. And every medical condition that afflicted women was traced back to their reproductive functions. Women were nothing more than host bodies.

What makes this book especially fascinating is its dogged, relentless exposé of how the medical community, dominated by men, have, over thousands of years, created views, policies, diagnoses, treatment plans, and beliefs that women continue to encounter today.

Let’s face it, in the early years no one knew much about human anatomy because dissections were prohibited. Doctors knew nothing about cells, hormones, neurons, or the interaction between them. Female physiology stumped them even more. So doctors decided that “women’s bodies were overly wet because they had too much blood.” Menstruation, or the lack of it, was the cause of every medical issue that women presented.

Plato, the Athens philosopher decreed that the womb was a living creature that became “vexed and aggrieved” because it wanted to bear children. This evolved into the myth that the womb wandered throughout the body and caused myriad complaints and problems for a woman. The ancient Greek philosopher Xenophon suggested “banging metal plates together and making a huge racket so the uterus would flee back in fright.”

One could be excused for thinking it was a 1950s B-movie horror film: “The Case of the Wandering Womb.” Except, real women suffered severe trauma because male doctors (and philosophers) perpetuated such cockamamie crap.

Cleghorn’s research reflects the impact the Catholic church had on medical texts. The church taught that women were “deviant,” and a woman’s body was “inferior, defective, and always governed by the whims of the womb.”

This book reflects the almost total ignorance of the medical profession when it came to treating women. Pain was considered a woman’s cross to bear. It fell into the realm of hysteria and pathology. The “it’s all in your head” diagnosis got its start hundreds of years ago and continues into today’s “modern medicine” regimen.

In the 19th century using a vaginal speculum was very controversial. One doctor believed that women who were “speculumised” would become “erotically hysteric,” and a woman who had been subjected to that examination “was not the same person in delicacy and purity as she was before.”

Unwell Women presents a historical picture of medical treatment that women have been subjected to for thousands of years. The types of treatments have improved over the years. But the predilection within medical profession to discount, undertreat, ignore, dismiss, or ridicule women’s health issues remains, and the basis for it involves a long-standing disrespect for women.

Not all doctors dismiss a woman’s health concerns, but there are enough modern examples to place doctors on notice that, as Maya Angelou said, “When a woman tells you she is in pain, believe her the first time.”

Elinor Cleghorn has provided a well-research, well-written, and fascinating study of what most women already know. The difference is women now have the evidence to prove their point.