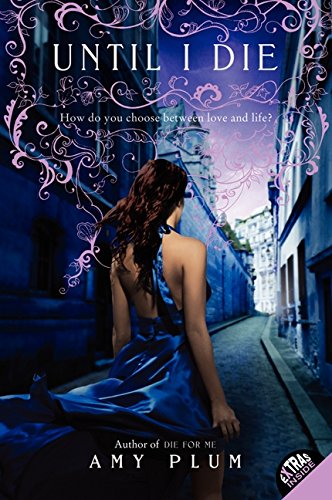 “This sequel does not disappoint. Until I Die is exciting . . .”

Until I Die is the second book in the young adult Revenants trilogy by Amy Plum. Revenants are zombie-like creatures, but not the flesh-falling-off-bone type. They’re hot, sexy—and just what Kate, our 17-year-old protagonist needs to come alive again after the untimely death of her parents.

When Kate meets Vincent and discovers what he is, they forge an unlikely romance. In book two, they are committed to being a couple and Vincent makes a pledge to do whatever it takes to spare Kate pain, the pain of having to experience him dying, over and over again.

What Kate didn’t count on is a new enemy making an appearance. It’s hard enough coming to terms with her beau having to die again and again to save the life of the innocent, but Vincent’s loss of immortality and his total destruction is beyond what Kate could imagine.

The sequel starts off rather slowly, relating necessary information and reintroducing characters to bring the reader up to speed, since the story ended in book one. One wonders if book two can live up to excitement of the debut. Not to worry. Amy Plum soon draws you into an exciting story. There are questions that begged to be answered—like who is infiltrating the revenant camp and sabotaging them. The reader’s mind will race with the possibilities.

Though this is a paranormal romance Until I Die often reads as a mystery. The romance is the foundation of the story, but it doesn’t overwhelm the book. Ms. Plum carefully weaves an action plot interspersed with the mystery element that drives the narrative forward; the romance is everpresent and simmering in the background.

Amy Plum does a good job of characterization. Each of the characters has a distinctive voice and personality, some of which will leave you heaving with laughter, particularly Kate’s sister, Georgia.

This sequel does not disappoint. Until I Die is exciting and even more action-packed than the first book. It ends on a cliffhanger that compels you to pick up book three to learn how it’s all resolved.