The Unsettling of Europe: How Migration Reshaped a Continent 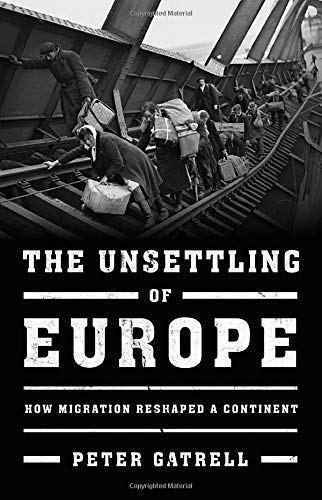 Here is a wide-ranging history and analysis of a force—migration—that has shaped Europe and continues to do so today. The author, Peter Gatrell, is an economic historian at the University of Manchester. He has written five earlier books on migration and two others on tsarist Russia.

This book focuses on the years from 1945 to the present. The scope is broad and includes chapters with these headings: Migrants in Limbo; Displaced Persons in Postwar Europe; Guest Workers in West Germany; Recession and Asylum in Europe; The End of Communism: Picking Up the Pieces; Together in Disharmony: The Death of Yugoslavia; Arab Spring, European Winter.

Having reviewed a tumultuous history and having considered current headlines about “refugee crisis,” “restored national sovereignty,” “boatloads of foreigners,” “border wall between Austria and Slovenia,” the author takes a long view: Since 1945, he says, Europe has enjoyed an unprecedented age of stability, peace, and prosperity—thanks in part to migration. Parts of Europe needed and got more workers. Thanks to intermingling of peoples, Europe’s culture has become richer. Bridges between nations and peoples are necessary, but they must be properly maintained.

The book’s two dozen photos from various archives illustrate the multifaceted impacts of migration: a female Estonian farmworker in Sweden, 1946; a Jamaican policeman in England helping an injured white motorcyclist, 1968; a Muscovite woman working in Kazakhstan’s Virgin Lands in 1961; guest workers from Vietnam in an East German factory in the 1980s; pieds-noirs leaving Algeria for France in the 1960s next to a photo of a harki family—Arabs who collaborated with the French—now uprooted.

Though this book contains some errors, a few mentioned below, it provides an overview and essential starting point for anyone seeking to understand migration pressures in Europe and, by extension to other places, from Bangladesh to Texas.

Gatrell’s book is already quite long, but it would benefit from a brief outline of earlier migrations; for example, Viking migrations into Russia, Sicily, France, and today’s so-called United Kingdom and the centuries of upheaval caused by Mongolian and Ottoman Turk pressures on Europe.

Gatrell seems to have absorbed the myth that Franklin Roosevelt gave Eastern Europe to Stalin at Yalta.  He writes that the Soviet reoccupation of Latvia was “confirmed” at Yalta, but the United States never recognized Soviet annexation of the Baltic republics, as US diplomat Jack Matlock reminded a Latvian audience in September 1986.

Another serious error is Gatrell’s assertion that the disintegration of the Soviet bloc in 1989 raised the challenge of what to do with ethnic Russians in non-Russian parts of the former Soviet Union. This question did arise in later years, but only after the collapse of the USSR in the last days of 1991. If the author misstates such elementary facts, what confidence should the reader have in his other assertions?

A later chapter on “The End of Communism” gets the chronology straight. Indeed, it provides a very nuanced analysis of what happened to the peoples of the USSR after 1991, including, for example, Pontic Greeks who had settled on the shores of the Black Sea in earlier centuries.

The author says nothing, however, about the “Karaganov doctrine” and a 1999 law authorizing the Russian Federation to intervene in the “near abroad” in behalf of “compatriots [sootechestvenniki]” living abroad. Both houses of the Russian legislature approved the law over President Boris Yeltsin’s objections that it had no basis in international law. The concern for compatriots continued in Vladimir Putin’s retaking the Crimea and meddling in Ukraine, Moldavia, and Belarus.

The author uses a wide variety of English and German language sources and a few in Russian. Though Gatrell writes about many different ethnic groups/nations, however, he seems not to refer to materials in any other languages.

The book includes eleven rather clear maps of Europe and parts of Europe at various time periods. One highlights land transfers from the losers in World War II to friends of the victors. But one map showing Poland and Lithuania fails to include Kaliningrad, which became part of Russia in 1945, squeezed between the other two countries. Some Germans now look wistfully at Kaliningrad, part of the former East Prussia. Kaliningrad is not mentioned in this book’s index.

The shortfalls noted here detract from what in many respects is a tour de force. They raise the question: Did the publisher hire any other expert(s) to review the text in detail?