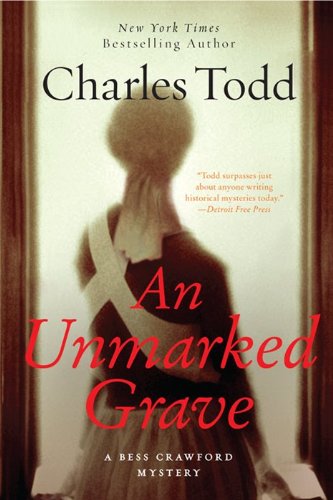 “. . . the authors fall down in this book. Nurse Bess Crawford is too saintly a figure.”

Nineteen eighteen must have seemed like the end of the world. A horrific war is followed by an influenza epidemic that kills within hours. . . . What’s next, a plague of locusts?

Charles Todd has demonstrated mastery over this period of history. Unmarked Grave is the fourth in the Bess Crawford series; this mother-son team also writes the Ian Rutledge series. In that series, Rutledge left a career at Scotland Yard to fight in the Great War. Upon his return to detecting, he is haunted by a voice in his head: Hamish, a Scot in his command whom he unwillingly had to execute on the battlefield due to insubordination. Call it shell shock, call it conscience, but Hamish is as real to Rutledge as hearing your cell phone ring. Both are compelling characters.

But the authors fall down in this book. Nurse Bess Crawford is too saintly a figure.

While on the front lines in France, she is shown the body of a man-not with battle wounds, but strangled. What better place to hide this body than with other causalities?

Bess recognizes the murdered man as a family friend. But before she can investigate, she is stuck down with influenza. When she recovers, the man who showed her the body is also dead.

Her parents convince her back to England to recover and get her posted to a clinic near her childhood home, where she immediately begins to investigate the victim’s background.

The phrase that inspired Britons—Keep Calm and Carry On—may have originated during WWII, but it certainly applies here.

Unlike in the Rutledge series, here in the Bess Crawford Mysteries, the horror of battle is sanitized; the exhaustion of working 24, 36, or 48 hours straight is described, but doesn’t feel real because Bess is such a goody-two-shoes. For Bess to read as a believable character, she must react to the carnage she sees, but she doesn’t so much as have a good cry!

Charles Todd wastes good opportunities to show Bess feeling compassion, let alone empathy. She goes to a farm where all seven sons, either by death or injury, have been lost in the war. The father is broken by the loss of his sons. But instead of portraying this reaction as legitimate, our heroine portrays the father as a complainer.

Bess doesn’t need to have a breakdown to be human, but something needs to happen to shake off her complacency—to turn her into a human being.