The Unending Hunger: Tracing Women and Food Insecurity Across Borders 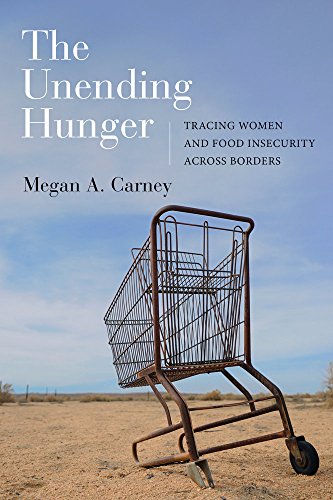 “Until we abandon needs-based approaches where food insecurity is regarded as an individual problem and ‘handouts’ are given to deserving ‘beneficiaries’ instead of to rights-holding residents there is little hope of stemming the ever-increasing inequality in America.”

Food is the hearthstone of culture and community. It nourishes while it nurtures family and friends. The preparation and sharing of meals transmit tradition and foster social intercourse and wellbeing. When food security is threatened, feeding is no longer a simple expression of caring, but a site of daily contestation, uncertainty, and stress, often with serious health repercussions.

In The Unending Hunger anthropologist Dr. Megan Carney examines the ways that food insecurity pervades women’s lived experiences of migration from Mexico and Central America to California’s Santa Barbara County. Fleeing poverty in their homelands, they are still struggling to keep body and soul together in America, fettered by the structural inequality endemic in neoliberal biopolitics, wherein even natural life has become politicized.

Food security means that everyone has sustained physical, social, and economic access to sufficient, safe, and wholesome food that meets their nutritional needs and food preferences for a healthy life. The migrant women in Dr. Carney’s study all experience food insecurity to various degrees despite the promise of the American dream.

As in much of the United States under the current globalization regime, Santa Barbara County exhibits ever-increasing disparities of wealth. A prime destination for migrant labor, almost one in five residents were living below the federal poverty level as of the 2010 census. Yet few of those eligible take full advantage of the federal and private relief programs available. Hunger abounds in this land of plenty.

Dr. Carney examines why this is the case in an incisive, empathetic, and engaging ethnography of 25 key informants, mostly undocumented, who we get to know as individuals as they engage in “la lucha diaria” (the daily struggle). In her analysis, Dr. Carney foregrounds the notion of feeding as care and what it means to provide caring labor, as this is a central theme in the women’s stories of the decision to migrate and their frustrations if they fail to provide healthy meals and lifestyles for their families in their new home.

This theme also speaks to the neglect in the transnational migration literature of how migration articulates with social reproduction—an already devalued area of women’s work which tends to be subsumed under production.

“Part of my decision here to tease out reproductive, ‘caring’ labors is thus not only analytical but also political. By capturing the nuances and injustices that structure reproductive labor, I hope to agitate for more comprehensive gender and reproductive rights.”

Dr. Carney’s informants tell of the anguish of uprooting, leaving children behind, and fracturing families. The pain continues through the transplanting in Santa Barbara, exacerbated by fears of deportation, the language barrier, and a very limited social safety net, often without a partner to share the burden. Women may work long hours as motel maids, daycare providers, and house cleaners but this never yields enough time or money to alleviate the worrisome, everyday constraints on feeding and eating that followed them across borders.

In particular, serving comida saludable (healthy food) can be an almost insurmountable challenge. Not only is it time-consuming to acquire fresh ingredients and prepare meals from scratch, the temptation of prepared and fast foods is ubiquitous and sometimes cheaper. People know that these foods are bad for them but they are hard to avoid given their busy lives and lack of control over the structures in which they are embedded. For example:

“Many of my key informants perceived the abundance of readily available comida chatarra (junk food) in the United States—burgers, pizza, processed bread, fast food, and the like—that was often served at school lunch as jeopardizing attempts to establish a healthy diet among family members.”

Informants were also well aware of the specific health repercussions of poor nutrition, such as diabetes, obesity, and high cholesterol, which can often be avoided or mitigated by consuming more fruits, vegetables, whole grains, proteins, and traditional beverages like aguas frescas (fruits blended with water); however, limited time and budgets make this difficult, as people must shop at local convenience stores with high prices or simply cannot get to the food bank at the stipulated place and time.

Guilt over current dietary shortcomings together with nostalgia for the familiar, tastier, foods of home are aggravated by the constant insecurity occasioned by illegality causing perpetual stress. As one informant expresses it:

“I stress all the time and I think this is what this is. I get nervous, but in the form of hunger. Anything I put in my mouth, a bread, a cookie, makes me gain weight when I am stressed. The stress also comes from driving without a license all the way to my job. It comes from needing to pick up my kids quickly, to get home to make the meals . . . every responsibility falls on me.”

Debunking the myth of migrant women coming to America to milk the welfare system, most of Dr. Carney’s informants underutilize government food assistance programs, even if eligible. This is because of the constant fear of apprehension by the authorities, along with the habit of keeping a low profile, misunderstandings about eligibility, shame about accepting food stamps especially if employed, the necessity for disclosing personal information, and the inability to make the requisite office visits.

These obstacles are compounded by the pervasive top-down approach to food assistance, predicated on a one-size-fits-all model of ideal food behavior wherein hunger tends to be blamed on the victims who need “knowledge assistance” about healthy eating as part of a healthy lifestyle.

Dr. Carney’s informants naturally resent this patronage, though they try to comply. They point to the absurdities of such programs as cooking classes which “teach” them dishes they already know how to prepare, such as quesadillas, or assume that all Latinas prepare high calorie foods laced with lard and are hooked on sodas and bagged cheese curls.

The Unending Hunger calls attention to the gendered effects of the structural violence inherent in neoliberal economic policies that have direct implications for global food insecurity and in particular for the foodwork of migrant women. The rich data Dr. Carney has obtained through her engaged anthropology are a compelling indictment of the human failings of our national food system.

All countries except the United States and Australia agreed to recognize food as a basic human right at the 1996 Rome Declaration for World Food Security, though few uphold this in practice as it runs counter to the current global logic of corporate production. Until we abandon needs-based approaches where food insecurity is regarded as an individual problem and “handouts” are given to deserving “beneficiaries” instead of to rights-holding residents there is little hope of stemming the ever-increasing inequality in America.