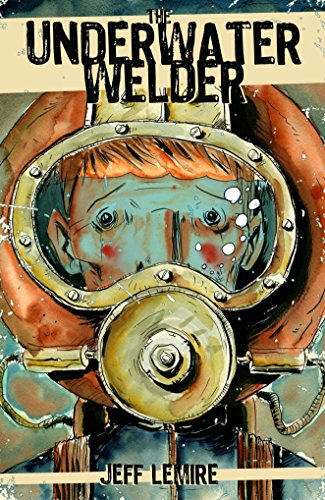 Jeff Lemire deserves another feather for his cap with the arrival of his new graphic novel, The Underwater Welder. Hitting shelves in September, this is a title almost guaranteed a place on the shortlist of the best graphic novels of 2012, and may well be the title that earns him his first Eisner Award.

Described by Damon Lindelof in the book’s introduction as “The most spectacular episode of ‘The Twilight Zone’ that was never produced,” The Underwater Welder is at once a time-traveling mystery, character study, and existential crisis.

We are presented the story of Jack Joseph, a 33 year old able to understand and manage the pressures of being an underwater welder, both figuratively and literally, but left at a complete loss when confronted with the pressures facing him on dry land. With a wife weeks away from giving birth, Jack decides to go out on a stormy Halloween evening to dive for a lost piece of his past.

Author Lemire is at the top of his game here. The pacing of the story is impeccable: moments where Jack is diving seem to slow down time. Brilliant—anyone who has ever been diving knows how important it is to maintain a slow steady breathing pattern and to stay calm in order to not elevate your pulse. All that’s there is the pressure, your thoughts, and the sound of your heartbeat. And for Jack, echoes of his father.

On this Halloween Eve dive, Jack goes back to find a pocket watch that he believes he tossed in the water when he was a child, a watch given to him by his alcoholic father, thrown away when his dad let him down for the last time. Upon finding the watch again, Jack picks it up, and we are hit with a barrage of memories flooding the pages, until Jack is finally able to break the surface gasping for air. But he has not just broken through the water’s surface; he has finally broken through his own shell.

In The Underwater Welder we are invited to ask: How do we escape the shadow of our parents? What makes a good father? Can we ever make peace with the past? How do I become the person I truly want to be?

And we are able to watch Jack contemplate the most important question he will ever ask: How am I supposed to be a father when all I know is how not to be father?

Mr. Lemire makes excellent use of splash pages and spreads, his delicate line work leading to sweeping watercolor brushwork—making us long for a full-color edition. The minimalist dialogue during the more introspective moments allows you to ruminate, along with the protagonist, the significance of past events and the role perspective plays on memories. At times, it seems that the author is trying to push you out of the story and into your own mind so when you return you are truly on the same page as Jack.

Jack’s wife is not given much to do except react to Jack’s seeming indifference to her pregnancy, but it works. She tries to reach her husband and ground him in the reality of their situation, but how can you reach someone that isn’t even there? Her pain, frustration, and anger are clearly illustrated.

“My name is Jack Joseph, and I’m 33 years old. The same age my father was when he disappeared.” This is the story of being in your 30s and facing fatherhood, the story of the anxieties that build up paralyzing us, trapping us, until the bubble finally pops as it breaks through the surface.

The Underwater Welder is the story of consciously choosing your life’s direction and running with wild abandon and joy toward it.