The Uncommon Appeal of Clouds: An Isabel Dalhousie Novel (9) 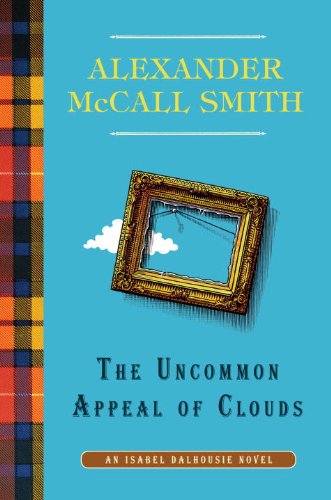 “There is always something comforting and rather special about a McCall Smith book . . .”

In this latest, the ninth installment of Alexander McCall Smith’s Isabel Dalhousie series, the Edinburgh philosopher and amateur sleuth answers an unexpected appeal from Martha Drummond.

To Isabel, Martha was one of those people who occupied that awkward territory between acquaintanceship and friendship. If she had been pressed, Isabel would probably have confessed that she found Martha slightly irritating. Despite this, when Martha asks for Isabel’s help, the philosopher can’t seem to say no.

Martha explains to Isabel that a very valuable painting by celebrated French artist Nicolas Poussin, was stolen from a wealthy gentleman by the name of Duncan Munrowe. The painting had originally been earmarked for donation to the Scottish National Gallery.

Isabel soon discovers that a ransom is involved and that the thieves may be closer to Duncan Munrowe than he ever would have expected. During a conversation with Alex, Munrowe’s daughter, Isabel is hit with the following revelation:

“Alex was about to say something, but seemed to check herself. She looked at Isabel’s cup, and offered her more tea. ‘Tell me,” she said, as she began to pour. “Tell me. Have you got any idea who’s behind this?”
Isabel sighed. ‘None at all. You see, I know absolutely nothing about the world of art theft.’

Alex digested this silently. Then she said, But Martha said that you were somebody with a reputation for sorting out extremely difficult situations. She said that you had helped people find out all sorts of things.’

Isabel shook her head. ‘Would that were true. I suppose I’ve been able to help a few people who have found themselves in a bit of a mess, but nothing more than that. I have no qualifications for any of it.’

‘Perhaps being a philosopher is the best qualification of all,” suggested Alex.

‘For what? For tracking down art thieves? Surely not?’

Alex persisted. ‘For understanding things that are difficult to understand.’

‘To an extent,” said Isabel. ‘But not this sort of thing.’

‘So you have no idea?’ asked Alex, again.

Alex shifted in her seat. She leaned back, closed her eyes and then opened them again, to fix Isabel with a playful but still serious stare. ‘So what if I were to suggest to you that it’s my brother?’ she asked.”

Is this sibling rivalry at its worse? Or simply a few red herrings to be conjured up to deflect attention, perhaps, from the guilty party?

Against the backdrop and intrigue of the missing painting, Isabel copes with life’s issues and all they entail, large and small, mundane and exciting.

She and husband Jamie have begun to suspect that their three-year-old son, Charlie, might be a budding mathematical genius. What should be done about it?

Then there is the question of whether Isabel should help a young couple who want to move in together—against the wishes of the girl’s parents. The boyfriend is hoping Isabel might intercede. As she wrestles with these problems, Isabel finds herself tested as a parent, a philosopher, and a friend.

The Isabel Dalhousie series of books may not be as popular or as well-known as Mister McCall Smith’s other female protagonist, Precious Ramotswe from The No 1 Ladies’ Detective Agency, but they are quickly gaining ground as each new book hits the stores.

There is always something comforting and rather special about a McCall Smith book, and The Uncommon Appeal of Clouds is no exception. It’s the kind of book long plane or train journeys were made for. An excellent addition to an excellent series.